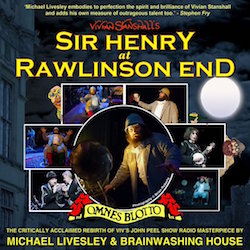 Actor, singer, and comedian Michael Livesley deserves some sort of major cultural award for bringing Bonzo Dog Band’s Vivian Stanshall’s brilliant wildly influential comedy masterpiece 'Sir Henry at Rawlinson End' back to the stage in 2010. A proselytizing friend played Livesley the original 1978 album, which has enjoyed a dedicated, rabid fan base since the first surreal story snippets appeared on the Bonzo Dog Band’s last album 'Let’s Make Up and Be Friendly' and 'Rawlinson End Radio Flashes' on John Peel’s Radio 1 show in the mid-‘70s. Widely regarded as one of the best British comedy albums of the century, Sir Henry wasn’t exactly in danger of falling into total obscurity, but Livesley was horrified to learn that it wasn’t being performed on stage anywhere. With the support of diehard fans like Stephen Fry and Vivian’s son Rupert, his faithful adaptation of the Python-like material as a one-man show, backed by the six-piece Brainwashing House band, has ensured its introduction to a new audience. The soundtrack to the stage show, featuring Rick Wakeman and Neil Innes, is the first release on Wakeman’s and Robin Ayling’s new label RRAW Records.

The story so far…

The character of Sir Henry, a choleric, pompous, farting old drunken aristocrat ruling from his deteriorating ancestral pile in the English countryside, Rawlinson End, was partially based on Vivian’s own conservative father and partially on himself. He explained the genesis of the character to an interviewer, “Sir Henry is my father amplified, but it is me talking to myself, which is a sure sign of madness. But everyone does it, for God’s sake.” In BBC Radio 4’s three-hour documentary about Vivian in 2014, 'English as Tuppence', Neil Innes said that during the period he was writing Sir Henry, Vivian was going through a difficult time and “his darker moments got longer.” Some of the vignettes for Peel’s show were written at the last minute.

The loose, totally incidental plot takes place over the course of a single day – with, inexplicably, four distinct seasons - in the ancestral pile Rawlinson End, on the grounds, and in the local Concreton pub The Fool and Bladder. The saga has something to do with the grotesque characters planning, dreading, and ruining an evening card party. The word play, rapidfire puns, dark humour, parodies, pop culture references, double-entendres, and incredibly silly jokes weave around story pieces that sometimes don’t even intersect, and listeners are too delighted to care.

Vivian’s biographers Chris Welch and Lucian Randall described the stories’ atmosphere of fading glory in 'Ginger Geezer: The Life of Vivian Stanshall': “England’s finest hour still hangs in the air – Sir Henry is proud of his "small but daunting prisoner-of-war camp" on the grounds. We feel we are very much in the twilight of the British Empire. But this is not simply a nostalgic feeling for the good old days. Florrie, Sir Henry and the rest seem almost aware that they are fading away, that their England has the ability to be as unlovely as it can be appealingly pastoral: as racist, greedy and class-ridden as it is green, pleasant and unhurried.”

Incredibly, Michael Livesley does the entire work, with the various characters’ voices and accents, by memory. This choice may out-eccentric Vivian, who stood at a podium and read from the script when he performed material from the album live! Livesley’s approximation of the different characters is impressive, especially Sir Henry’s discontented growl and Hubert’s creepy Boris Karloff smarm. He can pull off Vivian’s posh accent well, with an unshakable musical theatre aspect to his voice that, while very unlike Vivian’s, often makes the lines easier to understand. The beloved musical interludes, using Vivian’s favourite unusual instruments like stroh-viol, crumhorn, banjolele, surpeti, tube trumpet, and jaw harp, range from music hall clowning ('Nice ‘N’ Tidy') to rather sad, wistful tunes like 'Wheelbarrow' in the safe hands of the spectacular Brainwashing House band (a pun on BBC Broadcasting House). The band includes session player Ged Fox, the Stairs’ Jonny Hase, and Vivian’s favorite violinist Susie Honeyman from the Mekons.

This album will bring back joyful memories for those lucky enough to have seen Livesley’s stage show and reassure longtime fans, who treasure Vivian as the cultural missing link between Peter Cook and Monty Python, that Sir Henry really does live on.
Posted by Jon Downes at 16:58