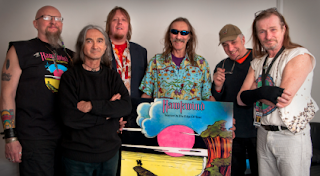 It's been announced that Hawkwind are to play support to the Australian Pink Floyd at the Jodrell Bank gig in July.

Hawkwind fans have mixed reaction to the idea of their veteran rock act playing second fiddle to "a mere tribute act" ...but Oz PF aren't any ordinary trib, and do appear to have been officially 'annointed' - David Gilmour had them perform at his 50th birthday celebrations. That does seem to make them a special case.

Maybe the ordinary rules of the rock n roll pecking order don't quite apply in this instance.....


Support acts for the highly anticipated Australian Pink Floyd 40th Anniversary of ‘Dark Side of the Moon’ show announced as Hawkwind, The Time and Space Machine and The Lucid Dream.

A unique element of the Live From Jodrell Bank shows has seen bands beaming their projections onto The University of Manchester’s 76 metre Lovell telescope and The Australian Pink Floyd’s spectacular audio visual production can be experienced at its finest in this unique environment.