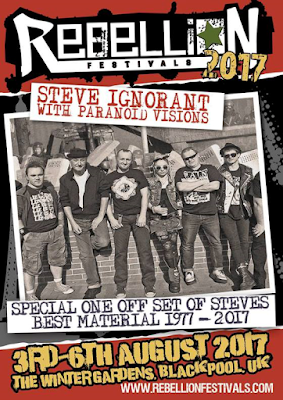 https://thehippiesnowwearblack.org.uk/2017/08/03/rebellion-2017-anarcho-punk/
This year's Rebellion punk festival gets underway today, with a line-up which featuring a variety of artists based in, or with roots in, the anarchist punk scene, including (but not limited to): Rubella Ballet, Slice of Life (3 August), Paranoid Visions, The Subhumans, Interrobang? (4 August), Anti System, Citizen Fish, Steve Ignorant with Paranoid Visions, special set 1977-2017 (5 August), Zounds, Culture Shock, Ex-Cathedra (6 August).
Steve Ignorant's appearance with Paranoid Visions on 5 August, which promises a 'one-off set of Steve's best material, 1977-2017', is likely to include the first full-band performances of significant amount of material from the Crass-era of his work since The Last Supper tour finale in 2011

CURRENTLY AVAILABLE FROM GONZO
Posted by Jon Downes at 12:19