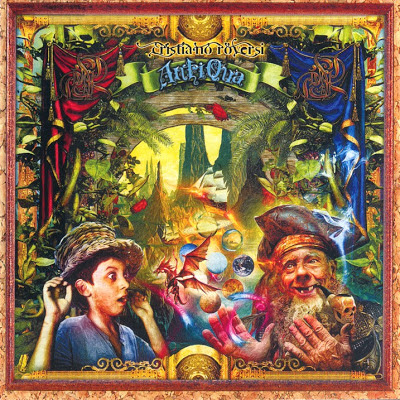 Fans of the classic Italian progressive rock sound will want to pay particular attention to this release from Moongarden founder Cristiano Roversi. Roversi is currently handling the keyboards for another band reviewed here called Mangala . As a noted keyboard and Stick performer, Roversi has assembled a stellar cast including members of Le Orme and PFM to help execute his musical vision. And in that respect this album;AntiQua is an interesting musical experience.

AntiQua is a soft and delicate forty-six minutes of music that is pastoral, open and full of delicate melodies that drift from one musical motif to another. Roversi lists Anthony Phillips as a powerful influence on his style and you can certainly hear that is these acoustic guitar driven compositions. Often times it’s the guitar on its own strumming beautiful open chords with just a hint of symphonic keyboards in the background and then the guitar takes a more prominent place playing the lead line, which may trade off with a delicate piano. A couple of the tracks have vocals, others feature shimmering Mellotron strings or choirs. Now it should be said that there is also a goodly portion of early prog style electric guitar reminiscent of Steve Hackett, but it is used more for colouring and accents never taking away from the overriding pastoral tone. The music is highly symphonic in nature and lushly orchestrated with keyboards and instruments of all sorts at times giving off a very cinematic feel best exemplified in the opening passages of “Tales from Solitude Suite” [13:34].

AntiQua is the kind of disc that reminds you of everything you love about symphonic prog, especially the softer 12-string guitar, Mellotron style and yet it also is very much something of its own. On one hand it’s very English and yet incorporates that classic Italian symphonic sensibility. For fans of symphonic prog I highly recommend it. You should check it out.