All this and The Beatles Too 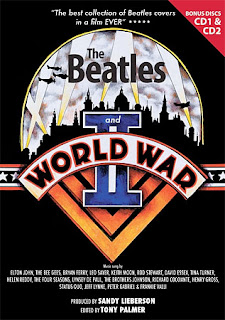 London, UK -- Legendary musical tribute "The Beatles and WWII" will be issued on CD/DVD by Gonzo Multimedia UK on July 15, 2016.

Take a group of some of the most famous solo artists of the 70's - Elton John, Tina Turner, The Four Seasons, The Bee Gees, Peter Gabriel, Bryan Ferry, Rod Stewart, Leo Sayer, Keith Moon, Helen Reddy, Jeff Lynne & Frankie Valli - get them to sing cover versions of some of the most famous Beatles songs ever written. Add a considerable dollop of authentic documentary footage of the Second World War telling the story of that epic encounter...and what do you have?

"The Beatles and WWII"!

Sound crazy? It is. But enormously entertaining, and occasionally very chilling. A unique blend of music and film like no other. Of that much we can be absolutely certain.
In an article written by Ronnie Dannelley editor of Ear Candy Magazine: "The old 1976 film was the strangest mix of cinema and rock 'n' roll, combining World War II images (newsreels and Hollywood films made at that time) with the music of The Beatles (not The Beatles original recordings, but by various artists). The old movie combined a pastiche of World War II-themed film segments (both period films and post-war action films) with the backdrop of the music of The Beatles (NOT the original songs, but cover versions by various artists). Strange concept huh? A long story, but the end result was disastrous. The original distributor junked the film so completely that no copies survived, and the film took on its iconic status."

Says legendary director Tony Palmer of his new film, "Although the original 1976 film had disappeared, thanks to the indifference and stupidity of the original distributor, instinctively I felt the central idea, and the material, and of course the music, were just too good to be lost forever.

"So for those fans who have had to rely on a few very poor quality extracts on YouTube, the 2016 film is a completely new experience, much of it in HD. Yes, we have used some of the original tracks, but added a lot of new archive footage, some never seen before. In addition, I have often used totally different music. The film starts with Vaughan Williams, and ends with Shostakovich, taking in Rachmaninoff en route and including many of the famous 2nd World War speeches by Roosevelt, Churchill, Montgomery, Chamberlain, Joe Kennedy and Hitler. And the film makes reference to war-torn Syria and the massive problem of immigration along the way.

"It is a far more complex film than the original, and I hope will give everyone pause for thought about the troubled world in which we live."

"The Beatles and WWII" was Produced by Sandy Lieberson and Directed & Edited by Tony Palmer. For more information, visit Gonzo Multimedia.