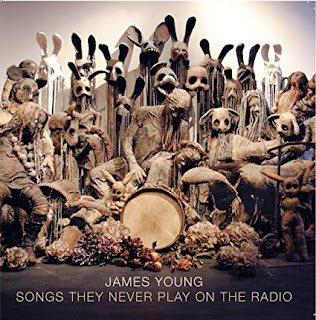 I think anyone who has ever heard Nico sing is struck by her voice, her style, her… well, struck byher, really. James Young performed and recorded with Nico in the 1980s, playing keyboard and piano in The Faction, the band that backed her. He published a memoir about those times titled Songs They Never Play On The Radio (some editions are titled Nico The End). Then in 1994 he released a CD also titled Songs They Never Play On The Radio, featuring songs based on his memoir, as a tribute to Nico. Now he is releasing a new CD titled Songs They Never Play On The Radio. This isn’t exactly a re-issue of the 1994 album, though a few tracks from that album have made their way onto this disc. Most of the songs were written by James Young, the only exception being a cover of “My Funny Valentine,” a song that Nico And The Faction included on the 1985 record Camera Obscura. James Young plays most of the instruments on this CD. And, as you might expect, a lot of this music has a beautiful, haunting quality.

The album opens with its title track, “Songs They Never Play On The Radio,” which was also the title track to the 1994 release, and features Henry Olsen on guitar and drums. Olsen also produced the track, which was the closing track on the 1994 album. The vibe is mellow and thoughtful, with a strong, steady heartbeat on drum throughout, making the song feel like a living entity, or the clear memory of one. There is something oddly comforting about this song. “One night we’ll laugh at nothing at all/Like we used to do/And we’ll close the window on it all/Just like we used to do/And I’ll do the best I can/And you’ll try to understand/And we’ll slowly dance the night away/As we listen to the songs they never play/On the radio.”

That’s followed by “Breathe For Me,” an instrumental piece that feels like part strange lullaby, part mechanical expression, all the while with the sound of a life support apparatus going. Nico had wanted to incorporate that machine into a recording after her son had been hospitalized. She never got to it, but James Young has done it here. Is the person on life support taking part in the music through the machine, or does the music work to almost mask the sound of the machine and what it means? And that last breath – is the person suddenly able to breathe on his own, or is it the person’s final breath? Either way, the music is over.

“It was a lovely day… for a funeral” is the first line of “Down By The Wannsee,” a strange, distant, haunting song, which creeps up on you, then recedes. James Young plays piano and harmonium on this track, and is joined on vocals by MacGillivray (Kirsten Norrie). Her beautiful vocals remind me of backing vocals on certain Leonard Cohen recordings. This song mentions Nico by name: “They said Nico was in town/She needs a bed/Down by the Wannsee.” (Wannsee is a lake near Berlin, but it was also the name of the conference in which the Nazis discussed the implementation of the so-called “final solution.”)

I love the way “She’s In My Eyes” draws you in, slowly, carefully, almost sweetly. James Young plays melodica on this track. The song feels like a loving meditation, particularly in the first half. It becomes more lively, more awake in the second half.

The CD case and liner notes list “Planète Poussière” as the seventh track, but actually “The Cigarette Ends” is before, not after, that song. Here is a taste of the lyrics from “The Cigarette Ends”: “When the cigarette ends/I rush to your defense/When the cigarette ends/It’s the end of our pretense.” My favorite lines are “The wall fell down/Now it’s a postcard town.” Not bad, eh? “Planète Poussière” is one of the tracks that was included on the 1994 release, though under the title “Planet Pussy.” In this one, James sings, “I could go out and dance all night/I could make love by candle light/Buy a long-stemmed rose in a Chinese restaurant/Get down on my knees, give you everything you want/All I can do/Is look at you.” “Listen To The Rain” and “Curious” were also included on the 1994 release (though “Curious” was titled “Curious (Elvis Has Left The Building”). (By the way, “Curious” contains a reference to The Tempest in its use of the phrase “into thin air.”)

Exploding Plastic Inevitable was a series of multimedia performances in the 1960s organized by Andy Warhol and featuring The Velvet Underground and Nico. James Young switches the name around a bit for his “Plastik Exploding Inevitable,” an interesting track that gives you that sense of several different realms coming together for an event.

The last two tracks on this CD – “Dog” and “My Funny Valentine” – were recorded live in Berlin in 2008, as part of a tribute to Nico titledNico 70/20. The name of the event was 70/20 because it was held when Nico would have been seventy years old, twenty years after her death. The name is also a play on her song “60/40” (which is also written as “Sixty Forty”). “Dog” is a haunting, compelling piece, performed on piano. “My Funny Valentine” is the CD’s only cover, written by Richard Rodgers and Lorenz Hart. It’s a song that Nico covered on her 1985 record Camera Obscura, and one which she also performed in concert. Here James Young delivers an instrumental rendition.