I am embarrassed to admit that until their CD  The Chandrasekhar Limit popped through my letter box courtesy of the lovely Anne-Marie at Gonzo HQ, I had not heard of Zenit. But Galileo Records have been putting out so much fine stuff recently that I had high hopes from them. My hopes were justified - they are magnificent. Much more subtle than much of today's contemporary progfare the band show an admirable lightness of touch that should be emulated by all and sundry. They have a deft awareness of the importance of light and shade, in the way that Pink Floyd had, and that few bands that followed have mastered. They are a very very good band, and I have somewhat of a proselytising hat on whilst I write about them, because they deserve to be absolutely massive. 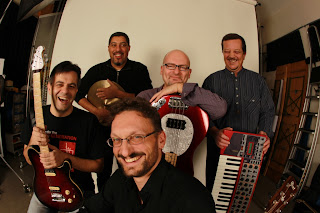 Just in case you missed it, yesterday's installment of this interview can be found HERE

JON: Have you got stuff written for the next album yet? 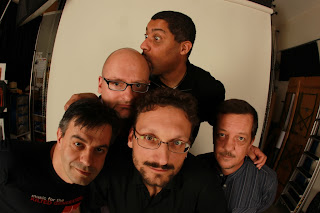 ANDY: <laughs>  I sent, this morning, a demo to colleagues with an idea.  We have a lot of ideas but the difference between the other albums and this one, is that we have very few ideas at the moment, and one thing is that the keyboardist – who is the oldest member of the band – he played it say 15 different bands over the years and he had a lot of ideas and a lot of material, and that is what we mainly used as a starting point for the first three albums.    And that is why we said The Chandrasekhar Limit limit is a point where you don’t know exactly which direction you are going to take. And that is exactly the moment where now we have to start even more from scratch.  We don’t have basic ideas, or very old ideas, which we can work on and modernise them or personalise them to the band so we are probably at a bit of a change, which is very good because we have this new drummer, who is a very good drummer,  and when we do some improvisation we see that it will be very easy to get to good ideas.  And that brings me to one point, if you’ll allow me to change a bit. Sometimes we get reviews where it says we are neo-prog or it’s really Marillion-like, or it sounds like this or like that.  Most of these songs, the original idea, were written even when Marillion didn’t exist. Our keyboardist played in a lot of bands and he was extremely unlucky, because every time he was close to really producing something, the band split up, he changed country, he changed cities, or whatever and this was the first time he was able to use some old ideas.  I don’t know if you remember the cassette tapes – we had some old tapes which we listened to and said this is a good idea, let’s start on this one, and sometimes they were ideas from the ‘70s and the ‘80s.

JON: How long has the band been together?


ANDY: The band has officially existed since May ’98. It’s an interesting story.  I mean I played in another quite successful prog band, which was Clepsydra, which I left in ’98,  but I met Ivo – the keyboardist – and Gigio Pedruzzi – the former drummer – three years earlier because there was a tour planned for Clepsydra, but the drummer and the keyboardist had time issues or were not able to attend so we decided to go with tour musicians and I had extremely fun playing with Ivo and Gigio on drums, even if it was another band, and I always said that if ever I had time I would like to put up a project with them and when I left the other band the first call was to them and say hey let’s start something, and it was quite easy to found the band and the band’s ideas came up really fast and then we found a singer and guitar player and that’s the story behind. 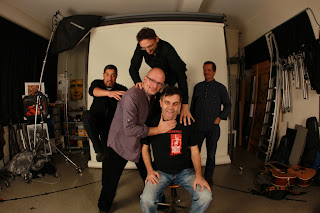 JON: Well I think it is a fantastic band and I’m very disappointed that I’ve not heard of you before.  Have you guys got any plans to play in the ?

ANDY: Oh the plans are there.  The problem is – on one side there are the cost issues and there are not many – you know I am in contact with festival organisers and all these things  - that’s the issue.  Zenit is not known of as a name, so when we call and when we send a promo or we send an email, we are one of probably 100s that they are receiving and it’s a bit difficult and strange for a band whose third album is unknown because the first two albums were self-produced, because we were really still doing music for fun.  We are not trying to make money out of it. We are not living for music and we don’t want to because we want to keep it as a fun factor in our lives.  And that’s a bit difficult.  We would play almost everywhere.  We are in discussions now with the , with and a few other dates in , so if anyone who reads this interview from the has a spot for us we would be extremely glad to  play in the .

JON: Well I see it as my job now.  I am going to go out and tell as many people in the about your band because I think you are very, very good.

ANDY: Thank you very much.  There is another small issue. Normally all these concerts and festivals – on the one side it is all the big names and on the other side – I often hear ah you are not progressive metal – we are too Pink Floyd-ish, we are too … I don’t know how to explain….. We have a lot of atmosphere – we are not hard enough for a lot of people and still a lot of people think that a band that does a lot of noise on the stage just to get more audience.  It’s a bit difficult, but we are working on it and again, we love to play live. And what we do, and I know it’s sometimes difficult to believe, but it’s a 90% match to the record because we really love sounds. We are not just playing it one to one, but we are really trying to give the audience the original feelings when you are listening to the record.

And I mean it! I think that they are a superb band, and really deserve to be massive, so I make no apologies for the fact that I am going to be campaigning very hard on their behalf from this point on!

In the meantime check THIS out: