EXCLUSIVE: Interview with Andy Thommen from Zenit (Part One)

I am embarrassed to admit that until their CD  The Chandrasekhar Limit popped through my letter box courtesy of the lovely Anne-Marie at Gonzo HQ, I had not heard of Zenit. But Galileo Records have been putting out so much fine stuff recently that I had high hopes from them. My hopes were justified - they are magnificent. Much more subtle than much of today's contemporary progfare the band show an admirable lightness of touch that should be emulated by all and sundry. They have a deft awareness of the importance of light and shade, in the way that Pink Floyd had, and that few bands that followed have mastered. They are a very very good band, and I have somewhat of a proselytising hat on whilst I write about them, because they deserve to be absolutely massive.

The Galileo website has this to say about them:

Zenit was found in Southern Switzerland (Ticino) in 1998 by bass player Andy Thommen, keyboarder Ivo Bernasconi and drummer Gigio Pedruzzi after their well-known experiences with bands like Clepsydra, Changes and Brainstorm. In 2001 with the addition of singer Lorenzo Sonognini, Zenit release their debut album „Pravritti“ with words in Italian as well as in English, followed by inspiring live performances in relevant prog festivals. In 2006, with the addition of Luigi Biamino on guitars, the band releases the second album „Surrender“. The song material is elaborate even so catchy and offers all fans of Genesis, Marillion, Supertramp, Kansas or Gentle Giant all that they love in their favorite bands. The production of „Surrender“ is crisp and very accurate what makes sound all tone diversity covering multiple musical desires. On Zenit’s 3rd album „The Chandrasekhar Limit“ (69 minutes), Andy Thommen affixes a seal with his distinctive bass play right from the start of the first song (“Awaken”). Later, with the start of the guitar, you will somewhat be reminded of the Clepsydra sound: awesome guitar-bass team play! Here you start with what you expect to get from this brilliant album: quality. The marvelous long tracker “Matrimandir” (17 minutes), brings a breath of oriental sounds in a very subtle but delicate way without being brash, despite the Sanskrit lyrics now and then. One of the best long tracker of recent times clocking around 25 minutes, is “The Daydream Suite” that brings reminiscences of Pink Floyd and all the other stuff a prog suite should have: crazy keyboard solos, melodic guitar lines, cool bass parts and complex choirs, harmoniously in action. The rocking instrumental sound of “Pulsar”, the sweet and sinful ballad “Cub Lady” and the screaming-jazzy “PiGreco” song, jointly make up an impressive and progressive rock album of the 21st century.

For those of you not in the know, I am bi-polar and there are some days - like yesterday - when I am no use to man nor beast. However, I did manage to pull myself together for about twenty minutes and have an interesting chat with Andy Thommen of Zenit. I was not at all well whilst I was talking to him, and had to truncate the interview fairly abruptly when my housekkerper and kids arrived, causing Prudence (my massively bulky bulldog x boxer bitch) to rush about everywhere like a tee-to-tum barking insanely. This was too much for my faltering mental health to deal with, and so I promised that we would talk again soon, and said my goodbyes. Andy, my friend - I am terribly sorry about that. I would have liked to have talked for longer, and I will set up another interview soon, I promise.

On with the show: 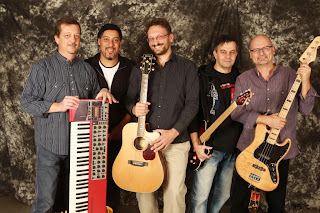 JON: I very much like your album.  I think it is very good indeed.

ANDY: Thank you very much

JON: Did it take a long time to do?

JON: That’s quite a long time.

ANDY: No, no, seven years is the time we had between the second album and this actual third album.  We had a lot of trouble between these two albums.  Mainly a band member had an accident, and we had kids coming so time was extremely restricted for another band member during this time.  We have a total of something like 12 or 13 kids for the band members so we are extremely busy with our families.  And at the end when we were ready, let’s say three years ago, the drummer changed which pushed us back a little bit on our plans, and finally we were ready, let’s say the middle of last year with a final print master, and then we made the deal with Galileo and Gonzo so it took a bit more time during the holiday season and then came the Christmas season and at the end it became January <laughs> so there are a lot of excuses but at the end for us it’s important to make  a very good product at the end – a very good album - and we had no strict deadline so in the end it took a lot of time but we are happy with it. 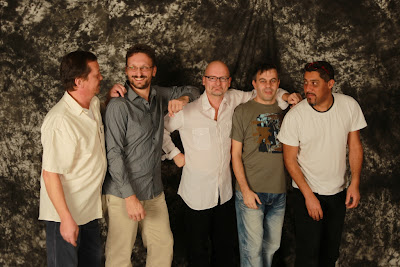 JON: Well, I think you should be.  It’s a very, very good album. I love the different textures of the sound.

ANDY: This was the idea.  We are all fans of Spock’s Beard, we are all fans of Flower Kings, you know, all these bands.  But normally we always say you put whatever song you decide or you try and you recognise them immediately because there is always this style across the whole sound and it was really the aim to make something that when you have to listen to a prog album which is normally very hard to  listen to from the beginning to the end, that you have different styles, different moods, different colours, different smells, that is why we went to this Asian/Indian sound and instrumentation to make it more comfortable to listen to. 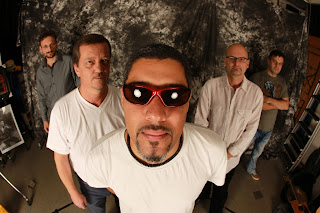 JON: Well you certainly succeeded.  I was wondering, did you write the songs in the studio or were they already pre-written?

ANDY: No, no absolutely.  It’s probably a huge difference between our colleagues, or some colleagues I know, we play the songs.  We play them in our room, we modify them, we make some experiments but we always play them, and when someone comes up with an idea, we say let’s try it, if we can’t make this modification or this kind of sound and once we have the ‘wow’ effect, we play and we say ok let’s keep this part and move on to the next one, so before we move to the studio we are able to play it from A-Z completely and when we are able to play it and we are satisfied with it, then we go to the studio. There are some minor things added really only in the studio like the female choirs in the Daydream Suite and some other minor things, but basically they are playable songs and this is also how we play them live.

This seemed like a relatively sensible place to knock off for today. We will be back tomorrow with the second part of this interview. In the meantime check THIS out: