Los Angeles, CA - Possibly the most anticipated prog release of 2013 will be released on May 15 – the sophomore album by celebrated LA prog duo Days Between Stations titled 'In Extremis'. Boasting an incredible guest line-up of music legends featuring Colin Moulding (XTC), Rick Wakeman (YES), Peter Banks (YES/Flash) Tony Levin (King Crimson/Peter Gabriel) and Billy Sherwood (YES/CIRCA:), Days Between Stations reach a new level of creative artistry on their new album. With a title like 'In Extremis' (Latin, In extremity – A term used in reference to the last illness prior to death) one can begin to understand the intensity and sepulchral mood of the musical direction.

Keyboardist Oscar Fuentes explains the concept behind the album, “There's the saying that your life flashes before your eyes in near death – and, presumably, actual death – experiences, so the album begins at the climax with 'No Cause For Alarm' and, as told on 'Visionary', 'flashes back to the beginning' and then in not strictly chronological order tells the story of our protagonist's life. Not cheerful stuff, I know, but there's some humor in there and if you read the lyrics I think ultimately it's a positive message. I've had some personal losses in the last few years, so I tend to grapple with that in my lyrics, while Sepand is going to be a father soon...we tried to integrate those two themes, birth and death, into the lyrics.”

Billy Sherwood comments, “I really enjoyed working with Days Between Stations, the music is very deep and has a mystique about it that was intriguing from the first time I heard the songs. I can't wait for people to hear this record. Rick Wakeman and Peter Banks of YES, Colin Moulding of XTC and Tony Levin of Peter Gabriel and King Crimson (playing all the bass), all appear as guests on this record which makes it even more unique. I played drums and sang lead vocals on the record and it was a pleasure to do so.”

Founded in 2003 by guitarist Sepand Samzadeh and keyboardist Oscar Fuentes, the duo named themselves after the cult novel by Steve Erickson and have devoted themselves to, as they say, Art Rock and Post Prog - music that reflects their varied influences, as well as shared disregard for stylistic boundaries. This eclecticism continues apace on this follow-up. At times the music recalls Peter Gabriel or 'Duke'-era Genesis (as on the propulsive “Visionary”, which features Sherwood's multi-layered vocals and Levin's driving Stick bass work), or an ambient marriage between Pink Floyd and Lisa Gerrard and Debussy (“In Utero”), or even a cross between Ultravox and Marillion and 'Abacab'-era Genesis (the Moulding-sung “The Man Who Dies Two Times”), but the band is about more than influences. As Oscar says, “We always try to create something new and not just re-hash a particular sound from the past. Sometimes it's the unlikely pairing that gives you something fresh.”

Although, Days Between Stations 'In Extremis' in some ways retains the dark somber mood of the group's first album (released to great acclaim in 2007), in other ways the music is completely different. Says Sepand, “There are four clear distinctions between the two albums. The first, is that we are five years older. Which means we have grown as players and have higher expectations of ourselves. The second, which is most noticeable is that we have vocals (with lyrics) on this album. The debut album provides landscapes and layers of sound that allow the imagination to run free. One negative aspect of having vocals is that the mind mainly focuses on the rhythm and lyrical content and often times constrains the music. We wanted a healthy marriage between the two. Even so, there are several instrumental tracks on this album, one in particular is 'Blackfoot'.” Oscar continues, “It wasn't really a conscious decision to add vocals to this one – I mean vocals with lyrics. It's just how the writing went. Sometimes a song tells you what it needs. So that's different. Also, the album is more thoroughly composed or let's say it's more structurally thought out. Although Sepand and I entirely wrote the music, the lyrics were written collaboratively with Billy Sherwood, who was invaluable in bringing more focus to the whole theme, and who in some cases took the idea in a different direction.”

Sepand concludes, “I feel the third difference on the new album is the extensive use of classical and exotic instruments; a full orchestra was employed on the first track, 'No Cause For Alarm', an instrumental overture that weaves together many of the main themes from the album. While the track 'Waltz In E Minor' is performed by a string quartet, the full orchestra returns (along with an unexpected Barbershop quartet) on the closer, 'In Extremis', a 21-plus minute multi-part epic that also features founding YES guitarist Peter Banks. Additionally, a Persian lute called a Tar is featured on the track 'Eggshell Man', a song that also features a blistering Moog solo from YES maestro Rick Wakeman. In fact, on 'Eggshell Man' Rick Wakeman, Billy Sherwood and Peter Banks play together. This brings me to my final point; when all these legends came together to contribute on this album, we developed a certain obsession to be at our best. Sadly Peter Banks passed away during the making of 'In Extremis', making these recordings even more meaningful and special to us.”


Although not necessarily connected to the Prog world, legendary XTC member Colin Moulding graced the album with a sublime lead vocal on the track “The Man Who Died Two Times”, which has also been issued as the album's first single. Says Oscar, “Billy Sherwood had the idea that Colin's voice would be perfect for the song and he was right. 'Oranges and Lemons', 'Skylarking', 'The Big Express'...all of these I've listened to a million times. Another surreal moment for me!” Sepand adds, “Colin began communicating his thoughts on his first listen. I felt so much excitement and creativity from him, there was a great vibe between us. He really brought the song to life.”


Colin Moulding comments, “I had been doing some fun sessions for producer Billy Sherwood when he approached me with a side project that he was working on. It was this band Days Between Stations – an LA group I had never heard of before. It was inventive, extremely melodic, and had a lot of the qualities that got me excited about songs. So it was agreed that I would sing lead vocal on this track 'The Man Who Died Two Times'. As things have turned out it seems to have been a marriage made in heaven; I think with a little careful handling and the right choice of material, this lot could go a long way.”

Along with the legendary guest artists, the 'In Extremis' album cover art was created by famed artist Paul Whitehead, best known for his work with Genesis and Van Der Graaf Generator. Says Sepand, “To us, the artwork for an album is just as important as the music. We met with Paul at a coffee shop and I vaguely discussed the concept of the album – as the songs were not fully conceptualized at the time. He came up with some great images – on the spot – about this guy lying on a hospital bed while he was – as our lyrics say - 'retracing all of the memories'. These memories are whirling around him, while he is in extremis. The great collaboration that we shared with Paul allowed the music and the artwork to become symbiotic...creating a true, tangible concept.”

As far as future plans for Days Between Stations, a full documentary about the recording of the 'In Extremis' album is currently in the works. There is a strong possibility that the debut album will be remixed. Both albums will most likely be issued on vinyl as a limited edition release. Also talks of live performances are being discussed at the moment. In closing Sepand and Oscar have this to impart to their fans and listeners, “Thank you very much for your unequivocal support and for giving us confidence. Sorry for the wait, hope it was worth it!” 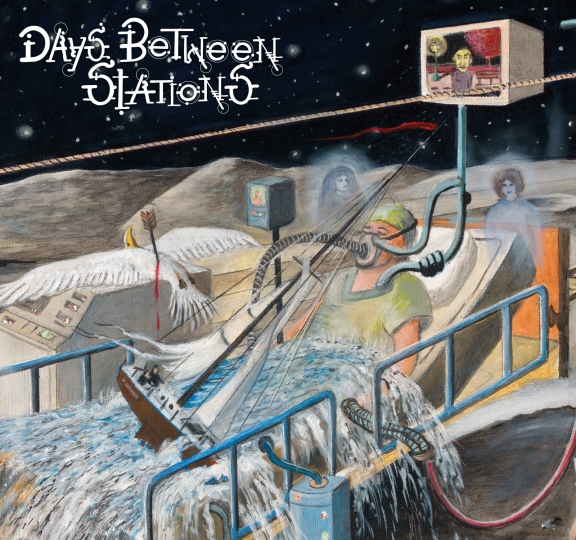