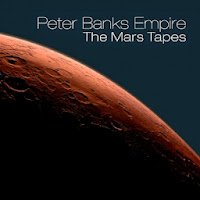 British guitarist Peter Banks was one of the original members of the progressive rock bands Yes and Flash. His musicianship helped define the genre, before being replaced in Yes by Steve Howe. Following his dismissal from the band, he decided to form Flash as another outlet for his music. After only three albums, Banks moved on to other projects, one of them being Empire. The band released three albums, but this time, his band was fronted by female singer Sydney Foxx and also featured Genesis' Phil Collins on a number of songs. Empire entered Mars Studios in the summer of 1979 to record songs for the band's next album. The sessions have sat in the vault for 35 years until its recent release through Gonzo Multimedia. The new 2CD set entitled "The Mars Tapes" features songs that have been released on some of the band's earlier albums, as well as some songs that have not appeared on any Empire album. The set opens and closes with a couple of songs from the band's first album, "Mark 1." While "Out Of Our Hands" feels like a sixties psychedelic rocker, "Sky At Night" is a slow-building, gentle flight that features Phil Collins on drums. Sandwiched between these two tracks are ten epic pieces of music, including the 18-minute "Medley" and the unreleased 17-minute instrumental version "Something's Coming" from West Side Story. The band really excels during the masterful nine-minute instrumental performance of "Somewhere Over The Rainbow Bar And Grill," while "Dancing Man" shows disco's influence in rock music. The short instrumentals "The Fall Of The Empire" and "When The Banks Overflow" sound like music pieces of a bigger project that never happened. The album was released in October. To find out more about "The Mars Tapes," please visit gonzomultimedia.com.