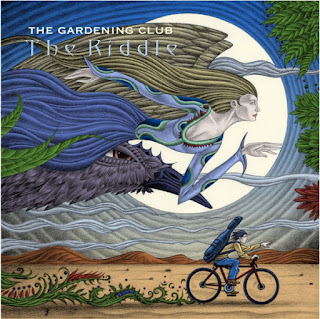 London - Due to the tremendous response UK prog ensemble The Gardening Club received for the reissue of their 1983 self-titled album last year, the band has released a brand new album! The new Gardening Club album, “The Riddle” was recorded at producer/guitarist Norm Macpherson's Garry Oak Studios in Metchosin British Columbia. This location surrounded by forest and close to the Pacific Ocean, was ideal for writing and recording the new record.

Martin Springett and Norm had known each other as young players while living in Victoria many years ago, both were drawn to the music the other was making; Norm was a phenomenal blues player even at the age of 17. Martin as a new immigrant from England, was setting Tolkien's words to music. Two very different worlds! The connection that started the new project, was a mutual friend, a poet named Cyril McColgan. Martin had been setting Cyril's poems to music for many years, and so after meeting up again, Norm and Martin decided it would be fun to 'do something' together, and Cyril's words were the connection for them both, and a starting point for recording together. There was no thought of an album, just an exploration of Martin's songs, old and new, with Cyril's words. The tale grew in the telling, to quote somebody or other, and when Gonzo Multimedia re-released the original “Gardening Club” album from 1983 in October of 2017, this inspired the recording sessions with a new hope that perhaps Gonzo might well be interested in this new Gardening Club project.

The shape of the album grew and changed as players appeared, miraculously you might say, that seemed to be a perfect fit for Martin's music. Norm's son, James MacPherson brought in his phenomenal drum programming skills, as well as some very effective synth solos. Sean Drabitt, a highly respected jazz bassist, came in with fretless electric bass, to provide a unique underpinning to the songs, Sean's first love being bands like Rush and King Crimson. Wayne Kozak, with a wealth of studio experience over the decades, provided beautiful soprano sax solos. Finally, Norm Macpherson, an award winning guitarist gave the album it's 'second voice', after Martin's heartfelt vocals, his signature soaring, slide guitar. Norm also produced and engineered the album, giving it a shape and focus sound wise that again complemented Martin’s songs perfectly.

The art that Martin Springett created for the album was actually a compilation of images created over a year prior to the recording. Inspired by the very positive reaction to his Gardening Club album's re-release, Martin explored as many aspects of The Garden as he could, and The Three Riddles came out of this fertile creative period. The 24 page illustrated lyric booklet that accompanies “The Riddle”, was the next visual challenge. Martin has always felt that the link between the visual and the musical exemplified the best of the Prog rock releases of his youth, and wished to emulate that particular specific synergy with “The Riddle”.

The band is deep in the recording of the next Gardening Cub album, “Boy On A Bike”. All the songs are written, two thirds of the album recorded. This a very different experience to “The Riddle”, where the band was learning to work together. In the new one, Norm and Martin can afford to experiment just a little more, the songs are all connected together sonically, making this something of a rock concerto. The same team has assembled plus some very cool guests, which of course changes things yet again.

Martin will be putting together videos with his art and music from “The Riddle” very soon, as well as for “Boy On A Bike”.
In closing Martin has this to impart, “Life is full of beautiful melancholy, moody mysteries, shadows and light, grand gestures, tiny life changing moments, exploding super novas, cosmic light shows, stalled cars, love, seven year old poets, thoughts on surviving heart surgery, an homage to a brilliant female artist, the original sleep; you know the usual stuff.” 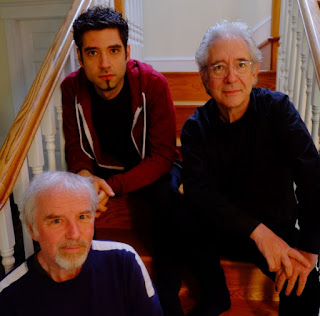 SEAN DRABITT - FRETLESS ELECTRIC BASS -  Sean Drabitt left Victoria, Canada, in early 90's to study Jazz bass in Los Angeles with mentor John Clayton. The next decade he spent first in New Orleans, where he worked with all members of the Marsalis family, then in New York, working with the best young players on the modern jazz scene, Kurt Rosenwinkel, Mark Turner, Eric Harland and Ari Honig among them. Specializing in a hard driving hard bop informed style of bass playing. Sean recently gave several performances on the West coast of Canada on fretless electric bass with his quartet, A Tribute To Jaco Pastorious! https://www.seandrabitt.com

WAYNE KOZAK - SOPRANO SAXOPHONE - Wayne is one of the most respected sax players on the West Coast of Canada. At home in any genre of music, his improvisations are intense and melodic explorations that add immeasurably to any song he is asked to play on. Wayne ran his own studio for many years in Vancouver, Wayne Kozak Audio Productions, involved in music production, advertising jingles and soundtracks.

JAMES MACPHERSON - James began playing different instruments when he was very young, including woodwinds in a variety of orchestras, then went on to play guitar, bass, drums and keyboards in many bands.  Teaching these instruments professionally, he also became involved with audio production, recording and producing albums for local bands. James brings a fresh and young energy to the music that has become an essential ingredient in The Gardening Club sound.

MARTIN SPRINGETT - Martin Springett is an artist, author and musician. He recorded his first album in 1969, settings of JRR Tolkien's poems. The album was never released, but this experience set Martin on a path to combine his art and music as one effective statement. The early days of the progressive rock movement were a huge influence, especially the combined effect of art and music, as in Roger Dean's covers for Yes. “The Gardening Club” LP, originally released in 1983, now considered a 'lost prog classic' by some, was the first mature linking of his art and music. After many years in the publishing industry, Martin is now committed full time to creating music and art that reflect his connection to this wondrous and terrifying place we call home. Planet Earth.