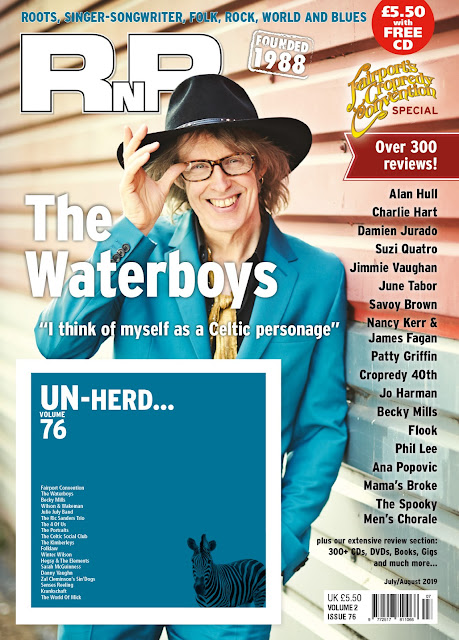 Back in the 90's Kev Rowland was a writer for the influential Rock 'n' Reel magazine. Fast forward 20+ years and now he finds his own work being reviewed in the latest issue of that august publication.

Those of you who are eagerly awaiting Volume 2 will be pleased to know that it is currently at the printers and will soon be available, but for now we would like to pass on our thanks to Rychard Carrington for this wonderful review.

By a pleasing irony, progressive rock, the most unfairly disdained sub-genre, survived the 80’s and 90’s through an impressive underground scene, existing under the radar of the sneering contempt of post-new-wave-orthodoxy.

The dedication of the subterranean protagonists – musicians, fans, writers – is surely testimony to the sheer musical quality of prog. While mainstream critics depicted prog as epitomized by Wakeman’s King-Arthur-on-ice shows, the true spirit of the genre could be found in gigs in pub backrooms, cassette-only releases and very tackily produced fanzines.

Kev Rowland’s ‘Feedback’ magazine grew, interestingly, out of a Mensa group for rock fans. Throughout the 1990’s, its support for financially struggling but aesthetically flourishing prog acts played a significant role in their survival. By the dawn of the new millennium, the internet had become the vital medium for disseminating speciality tastes of all sorts and in 2006 Rowland retired, emigrating to New Zealand.

Rowland is collecting his reviews in three volumes (in alphabetical order): their preservation for posterity is welcome. His writing is informative, intelligent, and generous. It certainly makes interesting reading. The known, such as Fish and Hawkwind, feature, but it’s more fascinating to read about the obscure acts, from A.C.T. to Höyry-Kone, treasured only by a small circle of cognoscenti. As Brian Appleton would put it, thank you Kev for your contribution.

CURRENTLY AVAILABLE FROM GONZO
Posted by Kev Rowland at 09:22