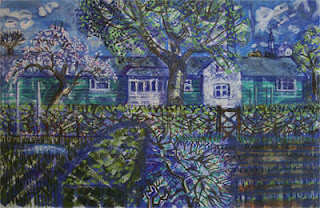 Kate Westbrook steps away from music briefly in order to oversee an exhibtion of here work at The BrownstonGallery in Devon for a month. The exhibition consists of Kate's paintings in oils and other works on paper. The work shown here is entitled The Long Shed In Spring 2011and it is a pastel work on paper. Full details of the Exhibtion can be found by checkin g out the links below or by checking with the gallery.
Alternatively you can check out Kate's work at the online Gallery here
http://www.westbrookjazz.co.uk/gallery/
from
Saturday 4th February to Saturday 3rd March 2012
at
The Brownston Gallery 36 Church Street, Modbury, Ivybridge, Devon PL21 0QR
01548 831 338
http://www.thebrownstongallery.co.uk/gallery/
Posted by Jon Kirkman at 09:32 No comments:

Atkins May Unplugged Version Of The Shallowing Available To View Now! 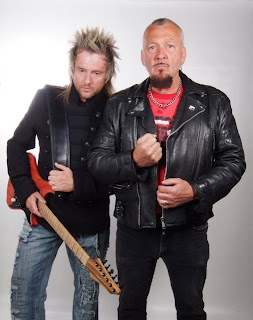 Atkins May have have filmed an "Unplugged" version of The Shallowing and the video is now available  to view on Youtube Here: http://youtu.be/cDgHHkUcJfc
The Track is an "Unplugged" version of The Shallowing which is a featured track on the duo's album The Serpents Kiss which was released in November 2011. The duo are currently in negotiations with promoters to play selected Festivals during the summer

You can purchase the Atkins May album The Serpents Kiss directly from Gonzo here:
http://www.gonzomultimedia.co.uk/artists/6768/Atkins/May
Posted by Jon Kirkman at 09:02 No comments: 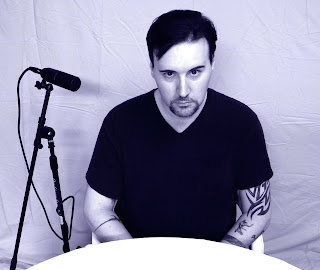 .
Genre Peak is the music and collaborations of electronic percussionist,composer and producer Martin Birke. Birke is well known for scoring original music for The Alvin Ailey American Dance Theatre, recording and touring internationally with Sandbox Trio, Casualty Park, Genre Peak and most recently with Percy Howard(Meridiem,Bill Laswell) in the duo Hardboiled Wonderland. Genre Peak has released 2 full-length albums Ends of the Earth and Preternatural

The new Genre Peak album Redux is released by Gonzo Multimedia International on March 12th and features the best songs from both previous albums and includes 2 new songs featuring the vocals of Percy Howard, the trackʻWords Surround Usʼ also feature violins by Benito Cortez and ʻBlue Filter (PH mix)ʼsets a melancholic tone with complex percussion and dark synths and the vocal pairing of Percy Howard & Tara C. Taylor.
Martin Birke's dark and complex writing style with Christopher Scott Cooper's production makes for a modern and distinct listening experience not be missed.
For videos,news and downloads
go to the official Genre Peak website ,Soundcloud and Facebook: pages
http://www.genrepeak.net/
http://soundcloud.com/genre-peak
http://www.facebook.com/pages/Genre-Peak/201477959917772
Posted by Jon Kirkman at 10:34 No comments:

Tony Palmer: Born Under A Bad Sign Republished By Gonzo 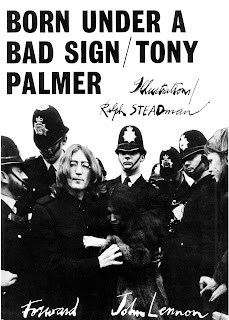 Tony Palmer's first book Born Under A Bad Sign is being republished in January by Gonzo Multimedia.
The book, which was Palmers first book originally published in 1970 contains a forward written by John Lennon and is illustrated by Ralph Steadman. This latest edition is the first time the book has been widely available since it was originally published in 1970 and as such copies of the original book are now extremely rare and change hands for large sums on the collectors market.

Born Under A Bad Sign is the second book by Tony Palmer to be re published in 2012 alongside The Trials Of Oz.
Both books can be purchased directly from the Gonzo website
Posted by Jon Kirkman at 10:17 No comments:


We at Gonzo hope everyone had a great Holiday Season and have got the new year off to a fantastic start.
Just a quick recap of some of the great albums we released in the run up to the Christmas period.
There were a couple of great releases from Galileo records in the run up to Christmas that will appeal to lovers of Progressive Rock and Progressive Metal

My Name Is Janet released their concept album Red Room Blue and have been reciving positive reaction from fans and critics alike. For more details check out the album here:
http://www.gonzomultimedia.co.uk/product_details/15404/My_Name_is_Janet-Red_Room_Blue.html

Another fantastic release from Galileo is the new album from Soul Secret entitled Closer To Daylight. Soul Secret are an Italian Progressive metal band and Closer To Daylight is the bands second album. One of the highlights of the album is “Aftermath”, a 16+ minutes trip between heaviness, melody and pure progressive elements. You can find more details here:
http://www.gonzomultimedia.co.uk/product_details/15403/Soul_Secret-Closer_to_Daylight.html

One of the highlights of 2011 was the release of the Live Jon Anderson and Rick Wakeman album The Living Tree Live Part One. The album was released as the due embarked on a hugely successful series of dates in North America and Canada and the album which was recorded on the duo's Uk tour in 2010 includes live readings of tracks from the studio album The Living Tree and also radical re workings of Yes classics including And You And I and South Side Of The Sky.You can find out more about the album and purchase it here:
http://www.gonzomultimedia.co.uk/product_details/15405/Anderson_-_Wakeman-Live.html

Elsewhere Former Manfred Mann's Earthband vocalist Chris Thompson had a good year and at the end of 2011 released two albums one archive album and a new live album
The archive album was the debut album from Night which also featured performances from Stevie Lange and the legendary keyboardist Nicky Hopkins. The album was originally released in 1979 and produced by Richard Perry and contains the hit singles Hot Summer Nights and If You Remember Me. More details Here:
http://www.gonzomultimedia.co.uk/product_details/15387/Chris_Thompson-Night.html

Chris also released a new live CD/DVD package Live In Berlin which is a double Live CD recording of a concert broadcasts for German radio. Also included is a bonus DVD containing a number of live songs and interview from a concert in Ashaffenburg at the start of 2011. You can view the details or order the CD/DVD here
http://www.gonzomultimedia.co.uk/product_details/15409

Just a quick reminder that we are now just down to a handful of the limited Deluxe Edition of the Anderson Bruford Wakeman Howe album so if you really want one of these beautifully packaged two disc sets you need to get a move on now or be disappointed.
http://www.gonzomultimedia.co.uk/product_details/15258/Anderson_Bruford_Wakeman_Howe-Anderson,_Bruford,_Wakeman_&_Howe.html

Gonzo is also moving into publishing as well in 2012 and the first book we are publishing is a fascinating book covering the now infamous "Oz obscenity trial" at the start of the seventies. Written by renowned film director and author Tony Palmer the book covers the background and the day to day account of the trial and subsequent verdict and appeal. 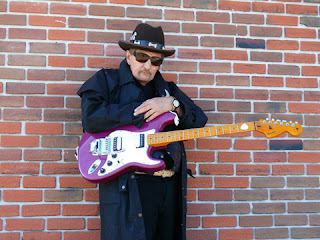 You can see Larry performing with Iron Butterfly on the recently released Lost Brodcasts DVD  featuring Iron Butterfly's performance for German television in 1971.

http://www.gonzomultimedia.com/product_details/15280
Posted by Jon Kirkman at 10:01 No comments: