Last night I watched Later with Jools Holland on the BBC iPlayer. It featured an appearance by The Beach Boys and following the news that I posted yesterday about the band splitting, I was interested to see what was probably the final TV appearance by all the members of the classic lineup who are still alive.

Just look at the two segments I have posted below. Brian seems somewhere else entirely, and heavier than he has appeared in years. The only time in the whole show that he appeared animated was during PiL's set (they were magnificent, by the way), when he was bopping along happily to Deeper Water. But the body language between the members during the interview was so angry and defensive that the whole thing made very uncomfortable viewing.

Brian's lead vocals on Heroes and Villains were excruciating  Something is very badly wrong with that particular group of elderly performers, and I have a sneaking suspicion that yesterday's announcement did not tell anything like the full story. And now I have absolutely no idea who are the heroes and who are the villains.

September 29, 2012 - Danbury, CT - Classic rock legends Wishbone Ash, one of the most influential guitar bands in the history of rock, kicks off the UK leg of their tour on October 4, 2012.

The tour, which began in Europe early this year, celebrates the release of Elegant Stealth, the group’s latest studio album.

Elegant Stealth represents a benchmark in the evolution of Wishbone Ash. Signature twin-lead melodies and a powerhouse rhythm section frame 11 new tracks that reflect a diverse realm of styles and moods.

Formed in 1969, Wishbone Ash has more than 20 original studio recordings and several live albums to their credit. On Elegant Stealth, the group coalesces around strong songwriting and serious chops. Founding member Andy Powell handles lead vocals and trades licks with Finland’s guitar wizard Muddy Manninen. Bassist Bob Skeat, a 15-year veteran of the band and in-demand studio musician, sets the pace with Joe Crabtree, one of the best of Britain’s new breed of drummers, having played with Pendragon and David Cross of King Crimson.

The band demonstrates its versatility on Elegant Stealth, from the pop/rocker “Reason to Believe” to the gentler vibe of “Give it Up” to tunes like “Warm Tears” and “Big Issues,” where the band gets to stretch out and flex its musical muscles.

Keith “MuzikMan” Hannaleck of MuzikReviews.com said, “This band is like a fine wine that just keeps getting better with age and this is one of their strongest studio releases in years.”

“The songs are catchy, very technical, but there is a soul in what Wishbone Ash is doing!” said Mark Kadzielawa of 69 Faces of Rock.

Citing Wishbone Ash as an influence on their style, Thin Lizzy, Iron Maiden, Southern Rock outfits like Lynyrd Skynyrd and, more recently, heavyweights like Opeth and some of the guitar-based Indie/Alternative bands, have all taken a little something from the legendary twin-guitar approach of Wishbone Ash. Truly, there is no other rock band on the planet that has done more with the twin guitar concept than the Ash.

Tour dates and more information can be found at www.wishboneash.com .

Review by G. W. Hill
Michael Des Barre has always been a pop rocker in classic style. This new disc from him shows that to still be true. While there is nothing here that’s going to create some new sound or trend, this is an extremely entertaining album from an artist with plenty of experience entertaining.

Captain Beefheart fans will certainly love to get their hands on this set. It’s from a 1972 appearance at the Beat Club when touring for his two brand new albums. He appeared at the Beat Club and for the most part these videos have never surfaced before. It includes some minor issues and glitches and the type of rather annoying effects for which the Beat Club was known, but it’s also quite cool. It’s a safe bet that Beefheart fans will be all over this because it truly is a rare release.

http://www.musicstreetjournal.com/index_dvd_display.cfm?id=100703
Posted by Jon Downes at 12:34 No comments: 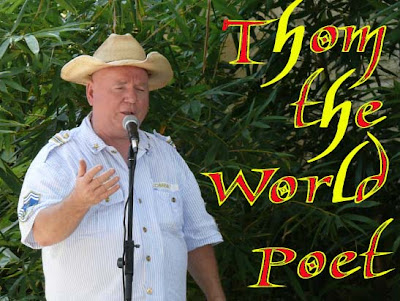 "Thom the World poet, is an old mate of mine from way back in my history. Even pre-dating Voiceprint, when I was running "Otter Songs" and Tom's poetry tapes and guest appearences with Daevid Allen, Gilli Smyth, Mother Gong are well known and highly regarded. It just felt right to include a daily poem from Thom on our Gonzo blog and when I approached him to do so, he replied with in seconds!!! Thom is a great talent and just wants to spread poetry, light and positive energy across the globe. If we at Gonzo can help him do that - why not? why not indeed!!" (The wondrous poetpic is by Jack McCabe, who I hope forgives me for scribbling all over it with Photoshop)

Hollywood models for us - luminaries, celebrities
Around us, domestic heroes and heroin
Addicted to Light, moth flames out
When you look UP! the heavens
each singular star beams bright.
Emperors of Star Wars want to gather that atomically
Israel, Iran jealous of Light/ancient as Forever
want to make only one (Death) star.
We would prefer not to be locked in such love -
to let the past beam down each night - and dream
of a world where Light is not an outlaw - more
illumination for the blind.
Posted by Jon Downes at 12:34 No comments:

Email ThisBlogThis!Share to TwitterShare to FacebookShare to Pinterest
Labels: thom the world poet

I saw Anderson, Bruford, Wakeman and Howe on this tour and it was purely magical. The opening section was unusual with solos by each member starting things, but it really worked. It was kind of an interesting way to show that while there were ties to Yes, this wasn’t going to be precisely a Yes show. It’s always seemed a shame that the one live recording that was officially released of this tour featured Jeff Berlin on bass instead of Tony Levin. That’s not to say anything negative about Berlin at all. He is an incredibly talented bass player and did a great job (with very little time to practice the material). It’s just that Levin played on almost all the shows of the tour and wound up in the hospital when the big day arrived for the recording so Berlin had to fill in on bass. So, it’s great that they’ve released this set which features Levin.
The original audio recording seems to have a few audio glitches, but there are small and there aren’t that many of them. In addition, there was something weird done with the track sequence here that seems bizarre. It’s even more bizarre in that the correct sequence (the order played in concert) is shown on the label for the set. Those things, though, can’t take away from the fact that this is an excellent concert and great to have on an official release. In addition, this set is packaged nicely (other than the glitch on the cover) in a DVD styled box and includes two audio discs, a DVD (a short documentary styled black and white film) and replica of the original tour programme. All in all, it’s quite a classy set that only has a few minor flaws.