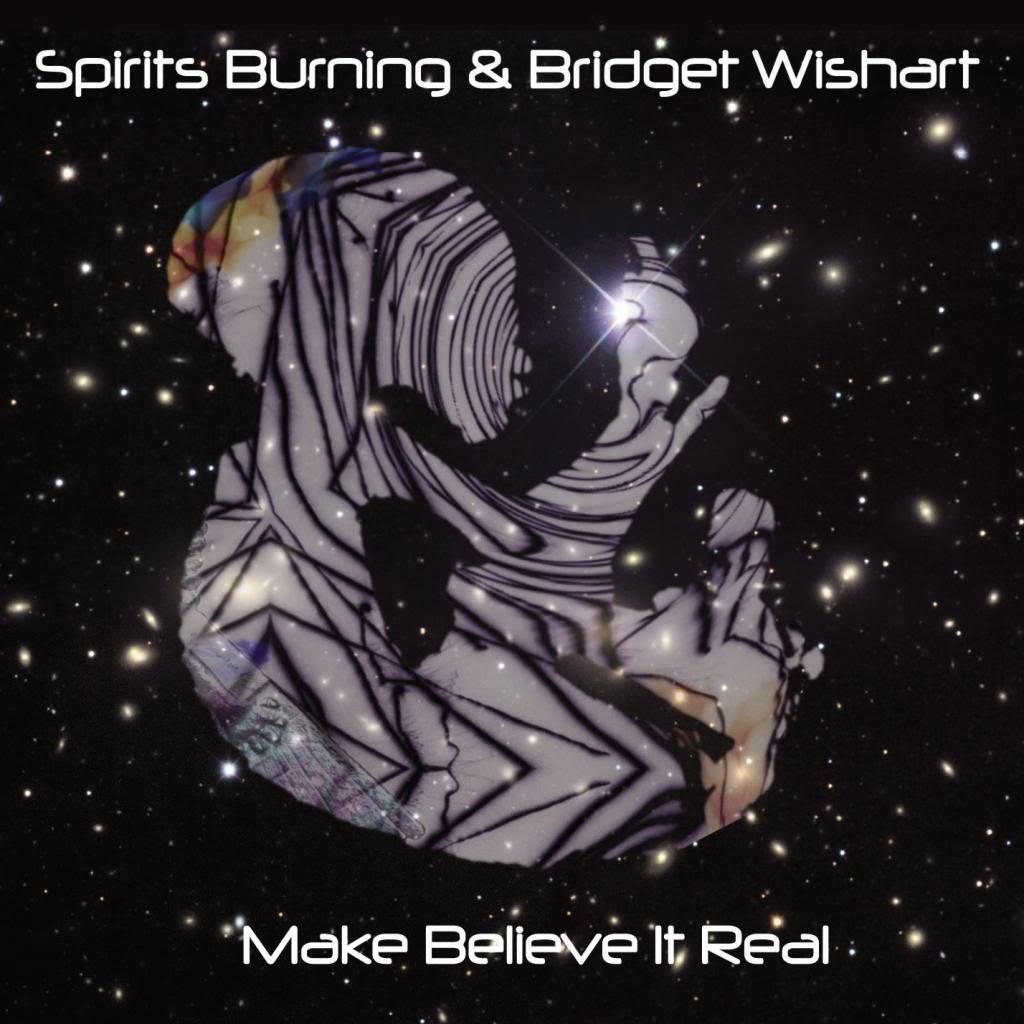 Make Believe It Real is the 12th Spirits Burning album and the third to be credited to Spirits Burning and Bridget Wishart. Of course multiple participants are the spirit of Spirits Burning andMake Believe It Real includes 35 musicians in a variety of configurations. In addition to Bridget and ship commander Don Falcone we have members of the extended Hawkwind family – Dave Anderson, Harvey Bainbridge, Steve Bemand, Richard Chadwick, Alan Davey, Paul Hayles, Simon House, and Dan Thompson. Daevid Allen is present as usual, plus Twink, Keith the Bass (Here and Now), Jay Tausig, John Pack (Spaceseed), and more. This is also the first 2-CD Spirits Burning album. Disc 1 features 11 new compositions and disc 2 consists of remixes and songs that were previously only available on compilations.
Disc 1 opens strong with Make Believe (It Acoustic), a Folk-Prog song that is at times tribal, traditional, and Medieval. Cyber Spice has some tasty atmospheric gliss guitar that I assumed was Daevid but is in fact Nigel Mazlyn Jones. The guitar sounds great alongside the contrasting Trance dance beats. Be Careful What You Wish alternates between spacey dreamy song and heavy rave beats. And it all occurs at once too. I love hearing the mellow flute, synths and spoken word narrative alongside the pounding rhythms. Spirits Burning albums can always be counted on for bringing together wildly different elements in exciting ways. Skyline Signal is a spacey, slightly whimsical, oddly rhythmic song that reminds me a bit of King Crimson’s The Talking Drum. Embers consists of darkly intense, electro-dreamy and sometimes ethnic infused tribal Prog. I like the driving percussion ensemble accompanied by winding, searing guitar licks. We’ve got some killer Space Rock songs too, often veering deep into Hawkwind territory. Revenant and Demonkind feature Hawk styled Space Rock with chunky guitars and synths blazin’. And with Bridget on vocals it’s back to Palace Springs! I like the Space-Prog of Eternal Energy. Spacerocknroll is precisely that. AndJourney Past The Stars is an easy paced song with a deep space lyrical theme. Wrapping up disc 1 is the 14 minute Reflections, which is unlike anything I recall having heard from Spirits Burning before. Piano, acoustic guitar and percussion are the primary instruments. And with Bridget’s vocal style the whole thing sounds like a blend of stage production, Folk-Prog, Canterbury and Kurt Weill. Very interesting piece and very difficult to adequately describe.
Disc 2 has six songs, some of which are my favorites of the set. Always (Spirited Away) consists of Space-Prog and rock ‘n’ roll, which is sometimes heavy and sometimes atmospheric, with deep space synths and violin leads. Very cool. No One Cries In Space is a beautiful spacey, funky ambient-jazz instrumental. Iceflow (Icetalk Mix) starts off similar, being a dreamily lulling ambient-jazz song. But then halfway through, darkness descends as it evolves into quietly intense tribal Space-Prog. Take Up Thy Stethoscope And Walk is a cover of the old Pink Floyd tune, which Spirits Burning contributed to the More Animals At The Gates Of Reason Floyd tribute. Make Believe It Real is a Dub and tribal infused Space-Prog tune. And Chain Of Thought is a stylistic cauldron that closes this outstanding set. It kicks off with Space-Prog that spans from Metal edged high intensity to rhythmic rocking. Then around the halfway mark there’s a quiet transitional bit before launching into a symphonic space rocker that’s variously heavy driving Goth metallic and floating trippy space. Definitely one of my favorites with lots of thematic twists and turns.
I’ve been following Spirits Burning since day 1, and though typically insistent on marveling at the catalog of releases as a body of work, I have to say that Make Believe It Real is a highlight.
For more information visit the Spirits Burning web site at:http://spiritsburning.com
Reviewed by Jerry Kranitz