Atkins May Project - Empire of Destruction 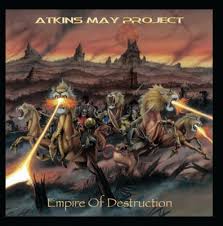 This year we were treated with the third release by band “Atkins May Project”, consisting ofJUDAS PRIEST's original vocalist, Al Atkins and guitarist Paul May. Immediately you can tell, just from the guitars alone, this is going to be a classic example of a Heavy Metal album, which to some may sound like a great thing but you can’t help but think that something a bit more original could’ve been done here to make the album stand out more.

Although more originality could definitely be infused don’t let this make you completely dismiss the album, especially if you’re a big fan of guitars. Paul May makes this album what it is and keeps it alive with his fast strums and shrill riffs, his talent definitely stands out throughout the album but I would say it’s most apparent in “The Midas Touch” as you can hear so many different riffs merged together to create something tastefully heavy and is definitely a delight to the ear.

As well as the heaviness expected from the album there’s also a softer side to it in “Here Comes The Rain” which I think works well within the album but it does at time sounds like 2 different songs merged together. Is it a song worthy of 9 minutes of your time? Perhaps at some points but after a while is can get a tad bland. To me the best song in the whole album is “The Darkness Within” since from the opening alone you will want to nod your head along with the beat that continues through the song and is aided by Atkins’ raw vocals, which again just scream classic Heavy Metal as soon as you hear them.

I would say all in all this is a well put together album but perhaps not after a 2 year gap between the last album, “Valley of Shadows”, since you would think something completely special that stands out from the crowd would’ve been made but in my opinion it hasn’t. It’s a great album for what it is but it’s nothing that will make you ridiculously excited about the band and make you want to listen to their entire discography.