CABINET OF CURIOSITIES: "This scenario from my imagination shows Jesus visiting a clinically depressed Paul McCartney. " 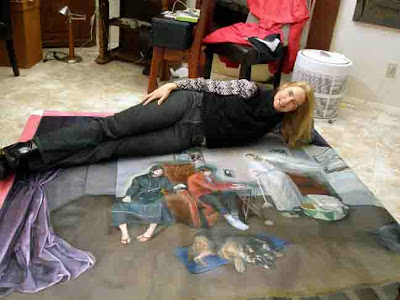 This scenario from my imagination shows Jesus visiting a clinically depressed Paul McCartney.
He is sitting on Paul's right side and slides a Lamb chop Puppet in to Paul's peripheral field of vision.
Paul hasn't bothered to get out of his robe.
His white socks dangle off the ends of his toes.
He is depressed and disheveled.
On the wall behind him is the cause of his plight...
Yoko...
(some say she broke up the band)...
but I include here a good retort to that from two anonymous writers via a Beatles fan site I visited recently--
these comments are in a small font---
"It's not that people think they wouldn't have broken up because of her because their break up was inevitable. But people just hate her. Like me, I can't stand her. Not because of what she used to do, but because of what she's doing to Julian. For not letting Cyn go to John's funeral. There are so many things people hate her for... I agree that those are terrible things, you are definitely right about that. I just get tired of people blaming her specifically for the break-up, and that happens A LOT. People have simplified it to that point. I’m not defending her as an ideal person or anything, it’s just the scapegoating and the “Yoko” trope (Ever been called a Yoko? Even without me saying anything, you all know what that implies). Not to mention the misogyny and racism that gets directed at her for no reason other than her proximity to John".

anyway----back to my painting....
Paul has taken a paint brush and scrawled a big X through one of Yoko's pictures
and he has painted red "devils horns" on another.
Below Paul's table is another picture of Yoko which he crumpled up and threw on the floor.
to quote John Lennon on this topic- "I've always thought there was this underlying thing in Paul's 'Get Back.' When we were in the studio recording it, every time he sang the line 'Get back to where you once belonged," he'd look at Yoko."
NOTE: I often mention that my paintings are often autobiographical in some odd way.
Maybe this piece is not only about Paul
but the angst I felt during the conception of the painting due to "faux friends" of mine.
on with the painting description----
Jesus likes Paul, so he hired an angel to tidy up his apartment.
The angel wears a Japanese robe and fuzzy fake leopard slippers.
She is turning around to smile at the viewer as she sweeps the floor.
Jesus' expression is slightly mischievous.
He knows that Paul doesn't want to communicate directly-
so he moves the puppet's little lambswool mouth
and uses a silly falsetto voice in an attempt to cheer Paul up.
Like many of my paintings, there are elements within the piece that are autobiographical.
The setting for this painting is the tiny living room of an old house by a railroad that I rented while attending Graduate School.
My beloved old German shepherd (Zoe) lies on her old blue mat at Paul's feet.
A couple of my other Beatles paintings are displayed on the living room walls. The big Lazy-boy chair is one I found at Goodwill.
The green and white 50's hassock and old floral covered chair (far right) I found at yard sales.
The purple drapes and painted wooden "stage" base were not actual to my little house
but I added them near the completion of the painting to give the piece a stage presence - (yes, all the world is a stage...).
The piece is the largest painting of my career.
The figures appear practically life sized.
I felt that the drapes and faux stage would visually invite the viewer into another world
(one where Jesus takes the time to cheer up one of the world's most famous rock stars).
This compels me to mention the deeper meaning behind this piece.
Please allow me direct you to my graduate THESIS (see paragraph and link below).
It will explain more about my quest to paint Jesus the way I see him
(in real time- with real emotions- interacting with people throughout the world regardless of their situation, status, problems, biases).
What are the emotions Jesus displays toward Paul?
Maybe those emotions include a quirky combination of compassion, wit and humor.
By the way, my THESIS makes a good case for wit and humor being classified as emotions.
For an overview of my Graduate Thesis please read the paragraph below.
and here's a link to my THESIS
KATA'S GRADUATE THESIS PAPER

overview: ABOUT MY GRADUATE THESIS:   The goal of my Graduate Thesis was to portray Jesus in real time and with the full gamut of emotions in twenty first American culture. Some may find the above painted scenario frivolous. Please remember it is only ONE example of the goal of my THESIS (to show Jesus as an emotional being). One painting can not show ALL the span of emotions. As I mentioned in the preceding paragraph, I chose to show Jesus' humor wit satire and compassion in this scene. The piece also expressed (for me) Jesus' ability to cross time and culture lines- (and this is where my work becomes serious behind a seemingly frivolous facade)....The people of many countries have recently experienced much graver conditions than most Americans- but Americans may soon know the dangers and challenges which much of the rest of the world understands. The American economy is in serious trouble. We have exported one of the things we Americans do best (invent and produce). Thomas Jefferson had strong warnings for America if the majority of its citizens ever became anything other than agrarian. He explained that this is the only way to remain self sufficient and independent individually and as a nation. The twentieth century witnessed bizarre measures to break apart the family farm. Crazy things like our Government paying subsidies for farmers NOT to produce. Many of our elected officials are driven my greed and a lust for power. They have created new credos of policing other countries declaring war without the proper Constitutional means. This alone engenders much of the disdain we Americans encounter by the rest of the world. One third of American homes are in foreclosure, millions of Americans have been robbed of their savings and pensions by greedy elites and bankers. Although in some ways we Americans have grown up like children, we have not been immune to suffering. Our suffering has been more of the silent type. The statistics in our country show very high rates of sexual and spousal abuse. Our enlisted men and women are suffering record levels of post traumatic stress and suicide. Therefore the point of this painting remains: no matter the tribe or tongue we come from, Jesus sees, cares, and is ready to become the type of friend we need Him to be. He is ready and able to heal a leper, or to befriend a depressed rock star. I have painted more "serious" paintings but they can be perceived as "preachy" in our post-Christian culture.

http://www.ebay.co.uk/itm/Jesus-Paul-Mc-Cartney-Lambchop-Puppet-Beatles-art-The-Beatles-art-painting-/190759889891?pt=Art_Paintings&hash=item2c6a2cebe3
Posted by Jon Downes at 01:54