WE HAVE NOWHERE ELSE TO GO

DESPITE SCIENCE FICTION HYPOTHESES
We live in a closed system.Even the Space Station needs supplies
that require Earth energy to get beyond gravity.Moon is still lonely-
still holding a flag and space junk.Mars has a camera.
Jupiter has Cassini.And we have Gaia.Globally warmed.
With storms,hurricanes,Tsunamis ,earthquakes...in denial
that our occupation affects the climate.7 billion times
But we will need a bigger boat than Noah's Space Ark
to Dunkirk this defeat.STAR ARK for Billionaires!
There is no Public Transport in space.Nowhere to land
that does not want us.Even Earth tires of our traffic.
Gridlocked and airlocked,"we have to change our lives"
Even science fiction no longer knows what to do..
Will AI and robots only look after their own kind?
WATCH THIS SPACE!

Hannah Osborne,Newsweek Tue, Jun 20 11:22 AM CDT
Stephen Hawking has warned that Earth is under threat and repeated his belief that humans must leave in the next few centuries if we are to survive as a species.
“The Earth is under threat from so many areas that it is difficult for me to be positive. The threats are too big and too numerous,” he said, according to the Evening Express. “Our physical resources are being drained at an alarming rate. We have given our planet the disastrous gift of climate change. Rising temperatures, reduction of the polar ice caps, deforestation and decimation of animal species. We can be an ignorant, unthinking lot.”
Hawking made the comments as part of his keynote address at the Starmus Festival in Norway. The event celebrates science and music, and aims to help the public get a better understanding of complex science.

The professor has made similar dire warnings about the fate of mankind in the past, but in his latest comments, he addressed several specific issues he feels are the biggest threats and talked about how we might become a multiplanetary species. 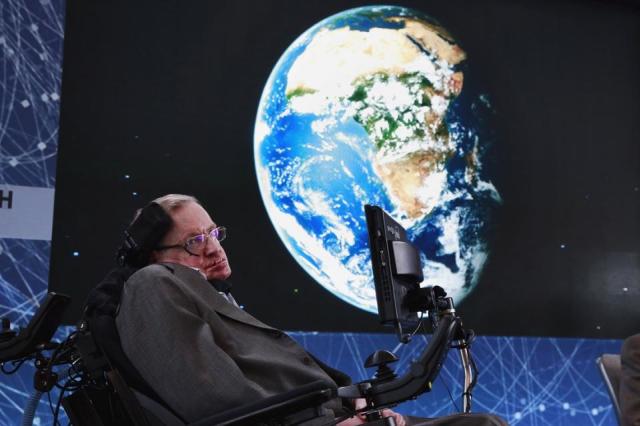 Stephen Hawking sits onstage during an announcement of the Breakthrough Starshot initiative with investor Yuri Milner in New York City, on April 12, 2016. Hawking, the English physicist, warns humanity needs to become a multiplanetary species to ensure its survival.
REUTERS/Lucas Jackson

Hawking said that in the past, when humans have faced “similar crises” in terms of resources, they moved to new parts of the world: “Columbus did it in 1492 when he discovered the New World,” he said. “But now there is no new world. No Utopia around the corner.

“We are running out of space and the only places to go to are other worlds. It is time to explore other solar systems. Spreading out may be the only thing that saves us from ourselves. I am convinced that humans need to leave Earth,” he said.

The Milky Way is home to an estimated 100 billion planets. Of these, millions, if not billions, are “potentially habitable,” meaning they could have the right conditions to host life, including a stable climate that allows liquid water to exist.

Hawking noted there are an estimated 1,000 stars within 30 light years of Earth, so if just 1 percent of these were Earth-like, we would have 10 candidate planets to move to. Hawking also said he believes humans will have developed the technology for interstellar travel within the next 200 to 500 years.
“Human colonization on other planets is no longer science fiction. It can be science fact,” he said. “The human race has existed as a separate species for about two million years. Civilization began about 10,000 ago, and the rate of development has been steadily increasing. If humanity is to continue for another million years, our future lies in boldly going where no one else has gone before.”
Posted by Jon Downes at 10:08