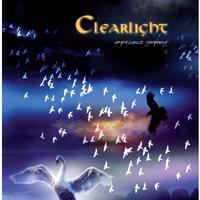 This album is kind of combination of classical music, progressive rock and space rock, along with some fusion.

Atmospheric elements that combine symphonic with electronic and space music open this and it builds gradually on that basis. Before the one minute mark it moves out into a more fully developed prog excursion that seems to have elements of both Genesis and Yes along with some fusion. There are some more hard rocking elements that take control later. Then it dissolves out into some nearly pure fusion. At times that part makes me think of Traffic a bit. It drops way down from there into some symphonic space weirdness. It definitely gets quite odd and quite spacey. Then a more mainstream prog rock jam rises up from there. This gets more symphonic elements later as it moves this way and that. Yet, it still maintains some louder rocking sounds throughout. The closing section even makes me think of Red era King Crimson quite a bit.

Time Is Monet
Symphonic elements swirl around bringing this one into being and it grows out from there. As this shifts and evolves, it really is very much a classical piece. In fact, there really is little rock in this piece. Perhaps a few of the melody lines feel a bit rock-like, but overall this is a classical piece moving through each and every change (and there are a lot of them) that way.

Pissarro King
Although it comes in rather tentatively, this quickly evolves to something like a cross between Tangerine Dream and Hawkwind. We’re taken through a number of melodic sections and at times some more driving guitar emerges. Still, that same blend of two artists pretty well matches the whole thing. There are some moments later in the piece that might evoke thoughts of Electric Light Orchestra, though. Also, it shifts quite classical later, too.

Degas De La Marine
Hawkwind space elements are heard on the opening section here. From there, though, it works out to more music that’s quite purely classical in nature. Electronic progressive rock emerges later, but still with a lot of classical in the mix. It eventually evolves into a jazzy kind of groove with space elements swirling over the top at times. Further down the road more classical sounds emerge to augment that space jazz mix.

Van Gogh 3rd Ear
World music and classical start this thing off in style. It feels quite a bit like something Rick Wakeman might do at times. The piece eventually evolves out into more of a progressive rock meets fusion kind of sound. Changes ensue within that scope, taking us through a number of short movements. Then it drops back to more classical styled music, but with a lot of electronic sound in the mix. A new jam emerges that again calls to mind Wakeman, but with some Genesis added in for good measure.

Gaughin Dans L’Autre
Coming in much mellower, classical music is the main thing at the start. Nothing changes quickly here, but this eventually grows out into more pure progressive rock merged with space music. Still, there is a lot of classical in the mix, even then. As this develops later some hints of world music emerge here and there. Guitar drives some of this later, but still the classical music surrounds and enhances it. Yet, space music serves as icing there. Playful classical music laced with space takes it later yet. The next movement is all about electronic based classical.

Lautrec Too Loose
This piece is very pretty as it starts. Classical, prog and space music all merge in a powerful and quite beautiful arrangement. The song grows out from there, getting more energy and power as it continues. It works through several changes. At times it’s more intense rock. At times it drops to mellower sounds. It’s all dramatic and quite effective. In fact, this might be the best piece of the whole set.

Monet Time (Duet)
The duet here is piano and violin. It makes this a classical piece through and through. It’s also quite powerful and packed with beauty. It does go on a bit long as far as I’m concerned, though. For that reason, I don’t think I would have closed the disc with this.