THE SYN (Chris Squire before Yes): Interview with Steve Nardelli! 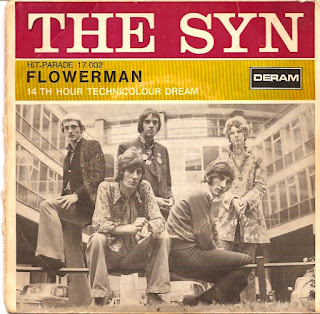 Ever since 1965, Steve Nardelli has been a busy man. In that year, the British singer and guitarist co-founded an R&B combo in North London called The Syn. Within two years, the band had evolved into one of the hottest psych bands on the scene. By the time the band released their first two singles in 1967, Nardelli had been joined by Chris Squire on bass, Andrew Jackman on keyboards, Peter Banks on guitar and Gunnar Jökull Hákonarson on drums. Their most high profile gig was opening for The Jimi Hendrix Experience at the Marquee Club in London – the very same legendary show attended by The Beatles! When the band split up before the year was out, many assumed that The Syn’s journey had come to an end. How wrong they were! Squire and Banks ended up in Yes and the rest is history. When Yes became one of the biggest Prog Rock bands in the world, The Syn’s records became collector’s items. Though Nardelli didn’t cash in on the success of Yes, he remained friendly with the band as well as all of his former Syn bandmates.

Various business ventures kept Steve busy for the next three decades, but by 2004 he reformed The Syn with Peter Banks and early Syn drummer Martyn Adelman. They recorded a few tracks that were included on the two CD Original Syn collection, released on Nardelli’s own Umbrello label. When Banks departed, Nardelli asked Chris Squire if he was interested in adding bass to a track, which lead to Squire rejoining The Syn. 2005’s Syndestructible album was one of the most heralded Prog releases of the new millennium. The band toured for the album with former Yes drummer Alan Whitealong for the ride (the live Armistace Day was recorded on this tour). Once the tour was over, Squire and the rest of the band returned to their day jobs and Nardelli formed a new version of The Syn featuring Francis Dunnery (It Bites) on guitar and Tom Brislin on keyboards. The resulting album,Big Sky, was an amazing collection of songs that introduced the band to a new generation of Rock, Pop and Prog fans. The Syn began their tour for the album, but had to cut it short when Nardelli got the call that his eco group’s site at NW Bicester was selected by the government to be one of four new eco towns. Quickly returning to the UK, the rest of the tour was scrapped. The last show performed by the Nardelli/Dunnery/Brislin line-up has just been released as Live Rosfest, a CD/DVD package that includes the brilliant sounding show on CD plus a pair of documentaries on the DVD.

CURRENTLY AVAILABLE FROM GONZO
Posted by Jon Downes at 12:30