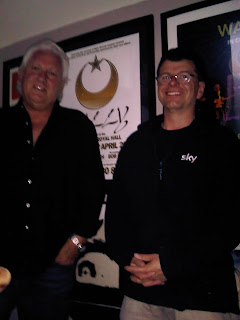 Gonzo have secured distribution rights to new reeases from 70's band Wally. Wally were signed to Atlantic in the 70's and the first self titled album was produced by Bob Harris and Rick Wakeman. A second album Valley Gardens was produced solely by Bob Harris.
The band performed many many high profile concerts including a guest slot on the 1974Rick Wakeman Garden Party Concert at Crystal palace.The band also appeared on the Old Grey Whistle Test.

Whilst the band split in the mid seventies they did reform in 2009 and were filmed at a concert in Harrogate which was played as a tribute to former members Pete Cosker and Paul Gerrett who had passed away. The concert was introduced by Bob Harris. The following year the band reformed again and the result was a double Live album entitled To The Urban Man

Roy Webber and Will Jackson also have a side project away from Wally, Jackson<>Webber and have recorded an album entitled What It Is

This also will be distributed via Gonzo

You can find out more about Wally and see photos of the band and a full biography of all the members at the Wall website here:
http://www.wallymusic.co.uk/
Posted by Jon Kirkman at 16:49