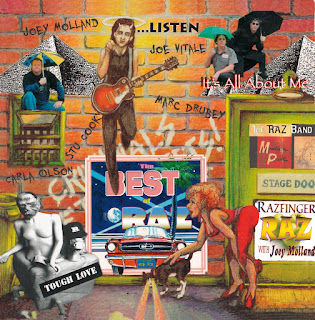 
Raz / The Best Of Raz - CD Review
... on CD , rock
by Mark Kerren
Artist: Raz (The Raz band) Label: Gonzo Multimedia Music style: psychedelic rock , punk rock , rock
After you end December last year the debut album from The Raz bandcould imagine, now following a good eight months later with "The Best Of Raz" equal to the lookup. Although it was Michael 'Raz' Rescignosince high school days music with drummer Jeff Hutchinson connected, but took not only now and then a time-out, the albums published for a long time under the name Raz , what of course always on solo discs hinted. Besides Hutchinson only the bassist seemed Jim Manzo a rock solid they flank Rescigno to have been.
Over the years, but also created genuine friendships with people likeJoey Molland (ex Badfinger , Ex- Natural Gas ) or Joe Walsh - Crosby, Stills & Nash and Eagles -Drummer Joe Vitale . It is these appeared sporadically over again sometimes in the recording studio and let it be taking to jam with their buddies. "The Best Of ..." spans practically the entire career of the protagonist and thus leaves much room for stylistic change.
Although admittedly are not really dramatic, but the journey of American from early - but ajar a good bit of punk rock - effervescence over hefty rock to Sixties-influenced pop / rock is already clear. Really good is the fact that Raz over the years repeatedly sometimes wind instruments (mainly saxophonist) with had in the boat, which the variability of course very well and does the present disc adds a lot of oomph. Not that the panel would be boring otherwise, but it is only by the stylistic interpretation already clear why Raz never really came on insider status also.
If you dive but something deeper, then one can very often really strong (punk) rock music to the ears. Raz is obviously a big fan of all early American punk bands, as was elsewhere a certain affinity to a Stooges - classic conspicuous so can here "Naked on The Floor" a relationship to Johnny Thunders ' "Chinese Rocks" not really resist. Evil is not, you take it only with a broad grin note.
A big surprise is the number "Sittin On My Bed" for Carla Olson (also with the blessed Gene Clark , ex- Byrds, playing already recorded an album and concerts) guitar and lead vocals took over. Of course, the title stands out somewhat because it - is still less progressive - no bad. At the very end there with "The Boy" and "The Times Together" two live pieces that go really nice on the Twelve. Eben quite as how these tracks desires live on stage.
That Raz was also the Psychedelic not completely averse to showing the song "I Said To Myself: Self", which, incidentally, none other than the former Creedence Clearwater Revival bassist Stu Cook was a guest there. Finally, also three titles of the aforementioned board of The Raz band with this, but what the listening does not diminish. On the contrary…
So who does not expect glossy production and has a certain penchant for rough rock with punk influences, will surely have fun here.

Tracklist "The Best Of Raz":


CURRENTLY AVAILABLE FROM GONZO
Posted by Jon Downes at 16:29