JON MAKES THE GUARDIAN IN AN ARTICLE ABOUT LATEST ANALYSIS OF PUTATIVE YETI HAIR... 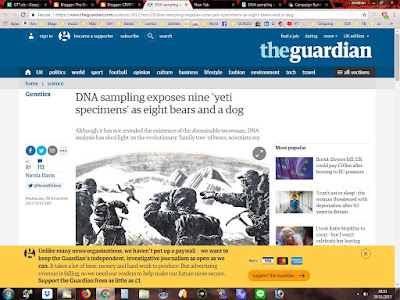 Jonathan Downes, director of the Centre for Fortean Zoology, said that while he applauded the scientific work and agreed that many samples are obviously from bears, he believes the mystery is not yet solved.
“I think there is still a possibility that there are unknown species of higher primate which are still awaiting discovery in what used to be Soviet central Asia,” he said.

https://www.theguardian.com/science/2017/nov/29/dna-sampling-exposes-nine-yeti-specimens-as-eight-bears-and-a-dog
Posted by Jon Downes at 08:57