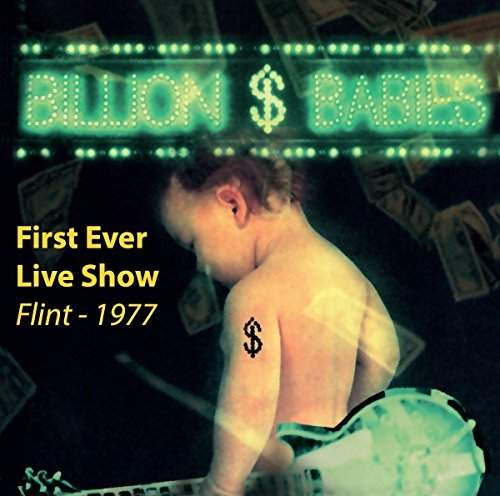 BILLION DOLLAR BABIES –
First Ever Live Show –
Flint 1977
Dancing nightly in the attic, shock-rock institution throw their weapon in the air one
Losing a front man may signal the end of any group; losing a singer who appropriated the band’s name as his own moniker would draw the curtains on any collective; losing Vincent Furnier to successful solo career should have resulted in the dissolving of his previous ensemble. Yet they soldiered on – under a different, if easily attributable, nom de guerre. Not for long, but for long enough to release a sci-fi album “Battle Axe” in 1977 and play a few concerts. The first – and, thus, historically significant – found its way onto bootleg and is officially released now.
It’s a testament to their determination. Not relying on the past laurels, the band brought most of their only LP to the stage, and even a mediocre quality of the recording can’t take away from the ensemble’s then-newly found energy – arguably more focused than earlier when they had a standalone focal point and theatrics. Live, “Love Is Rather Blind” could have easily fit the collective’s classic canon: even the singer’s voice sounds basically the same. Michael Bruce does a valiant effort of delivering vocals on such pieces as deliriously funky “I Miss You” or the show’s closer, the ritualistic gem that gave the group’s their name, while engaging in guitar duels with Mike Marconi on the likes of “Rock N’ Roll Radio” that, in front of the crowd, effectively marry glam gloss to punk crunch.
Not that BABIES were taking over from DOLLS. Bombastic on “Nights In Cracked Leather” and sentimental on “Rock Me Slowly” which are given an orchestral lift by Bob Dolin’s ivories, the quintet put on an aurally spectacular performance of their album’s titular suite, their old material medley – with “No More Mr. Nice Guy” and “School’s Out” as bookends, and Neal Smith’s drums solo as its heartbeat – preparing the listeners for this cosmic onslaught. It builds gradually on Dennis Dunaway’s bass foundation, yet hits heavy, if in elegant manner thanks to organ, to claim prog terrain when “(Sudden Death)” is unfolding and setting the scene for triumph. Unfortunately, the message of “Winner” wouldn’t be prophetic, and soon after this concert B$B were no more, the band members hooking up and again with their former singer and lingering on what had been done before the axe went skywards.
***1/2
Posted by Jon Downes at 16:38