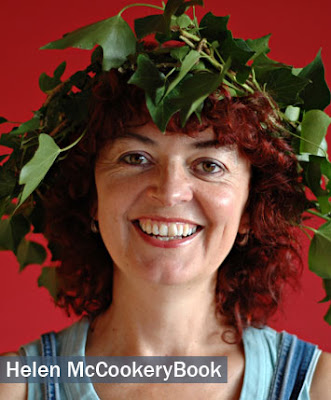 Today, sadly, we come to the final part of my long and rambling chat with the lovely and multi-talented Helen McCookerybook...

It was supposed to be about the rather lovely CD she has made with Daintees frontman Martin Stephenson. It is called Cafe of Tiny Kindnesses and it is one of the most delicate and beautiful things that I have heard in yonks.

But the conversation didn't end up like that at all. We spent a long time discussing our shared background in the DIY Punk scene of the late 70s and early 80s.

HELEN: I think one of the things that happens with music is that a particular genre of music, people will latch onto it when they are about 17 or 18 and then they’ll just grow out of it when they are 24. People just change so much.

JON: I still listen to an awful lot of the stuff I did at 15.

HELEN: Yeah, but did you have a break from it?

JON: My tastes broadened, but no my music has always been important to me.

HELEN: I didn’t listen to any punk for years and years, and then I started again. I sort of went back to the music I listened to when I was 14 – lots and lots of Tamla Motown and stuff. Just because the melodies were really uplifting and I found that punk became quite – it was just too miserable to sustain it actually, you know.

JON: I do know what you mean, because when I was – I am 52 now and about , round about the time I met Corinna who I married 5 years ago, so about 7 years ago when we met, I suddenly started listening to the punk music I had listened to in the late 70s and early 80s again. I hadn’t listened to Crass or Killing Joke or any of those bands for years, so yes I do see what you mean.

HELEN: A lot of the gigs I went to they would play Toots and Maytalls, you know reggae and I listen to that and it takes me straight back to then in a way that some of the other stuff that I actually saw live doesn’t really. It was very interesting time to have been around and I feel really, really lucky to have experienced it.

JON: It’s funny, I ‘phoned up to talk about your new record and we are talking about a load of stuff that happened 30 years ago. There are not that many people you can talk to about The Poison Girls, or The Pop Group or any of those bands.

HELEN: I’m back in touch – partly because of my book - with Gina Birch and Viv Albertine, who both started playing again recently like me really, and we have done some gigs together and it is really interesting being with them, because the three of us, we are all females in our 50s with guitars but the styles of music the three of us make are totally different.

The reason that we all picked up musical instruments in the first place is punk and it‘s very interesting talking to them because we’ve all got really strong opinions, and we all think differently – that’s the real spirit of punk – two reasons, one we are in our 50s and we’re doing it and two that we manage to be distinctly individual at the same time. It’s like I wouldn’t say any of the three of us has got any rules about how we play and what we sing about, anything like that and it’s all just really, really different from each other. Viv is quite... a lot of her lyrics are quite barbed really and she is very, very, you know she uses a Fender twin reverb and stuff and Gina uses a lot of loops and a lot of her songs are quite poignant in a sort of comical way. I think mine are much more kind of ... soft I suppose really. But it is quite interesting just watching them and thinking God we all started off at the same starting point, different parts of the country but it was the same button that pressed ‘go’ kind of thing.

JON: When you say you’ve done gigs together, on the same bill or on the same stage at the same time?

HELEN: On the same bill. Not collaborating

JON: I would love to hear you guys collaborate

HELEN: I think it would be difficult.

JON: I think it would be bloody impossible, but I would still like to see it.

HELEN: I’ve talked about doing stuff with Gina before but when we meet up we’ve usually got so much else to talk about, you know
Posted by Jon Downes at 10:37