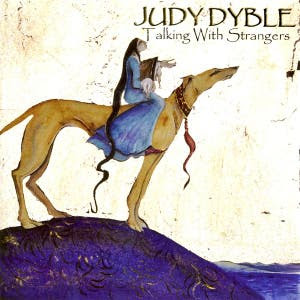 Lovers of English folk may well raise an eyebrow on hearing the name of Judy Dyble again.  This venerable lady, now in her sixties, had an illustrious history on the English folk scene in the Sixties and Seventies, as she was the first female singer with the legendary Fairport Convention and she was also one half of another legendary folk group, Trader Horne.

Judy Dyble was 18 when she joined Fairport Convention, one of the founding groups on the English folk rock scene.  Fairport was famous for Sandy Denny’s time with the band as their lead vocalist.  But before Sandy Denny, it was Judy Dyble who sang on the first album that Simon Nicol and Richard Thompson ever made, the eponymous ‘Fairport Convention’, which came out in 1968.  During this time Judy also recorded backing vocals on the Incredible String Band’s third album, ‘The Hangman’s Beautiful Daughter’, 1968, and hung out with the stars of the day, notably Jimi Hendrix and Syd Barrett.

She left Fairport Convention in 1968 to join Giles, Giles and Fripp, a band put together by Robert Fripp who was later to become the leader of King Crimson.  It was her then boyfriend, Ian McDonald, who brought her into the band.  When Judy broke up with McDonald and he joined King Crimson, she left to sing in Trader Horne with ex-Them musician Jacky McAuley, whom she met through Pete Sears, a session musician who initially played with the band before he left, leaving Trader Horne to continue as a duo.  Trader Horne led a brief existence but out of it came one of the great albums of the English psychedelic folk era, ‘Morning Way’ (1970).

Then in 1973 Judy Dyble retired from the music scene.  She became a librarian in Oxfordshire where she spent many happy and peaceful days with her husband and her children.  When her husband died in 1994 Judy again felt the siren call to return to the music scene.  This was a gradual process, beginning with guest appearances at Fairport Convention’s reunion concerts, then with two very limited edition releases of her albums ‘Enchanted Garden’ and ‘Songs from the Spindle and the Whorl’.

In 2008 Judy sat down to write a new album.  ‘Talking with Strangers’ first came out in 2009 and has since been released a number of times, as the record has gained fame and popularity.  Now a re-release on the Gonzo Multimedia label means that we can hear this album for the first time or have the opportunity to listen to it again.  The album was made, as is usual on the folk scene, with old friends from the Sixties (Simon Nicol, Ian McDonald, Tim Bowness and even Robert Fripp among others).

Tinged with psychedelia, a classically-folk style runs through the seven numbers, to which have been added two bonus tracks.  ‘Talking with Strangers’ takes us along peaceful, dreamy paths, from the lace-like grace of ‘Never Knowing’ via the diaphanous colours of ‘Jazzbirds’ and the reprise of Emerson, Lake and Palmer’s ‘C’est la Vie’ (written by Greg Lake who began his career in King Crimson with Robert Fripp, and who was a band member with Judy in Giles, Giles and Fripp).  Then we run through a number of songs which are rather similar in sound.  But the 20 minutes of ‘Harpsong’ put some real guts into this album.  Yes, the song begins in an atmosphere of drifting Indian mysticism with celestial voices and tinkling harp.  Saxophone and drums lend a space-rock like sound.  Then bang!  In comes a heavy rock beat which demolishes everything that has gone before, in true King Crimson style.  We get a better understanding of this number better when we read that Judy wanted to put various episodes of her life and her musical career into it as a way of summing up her time here.

This gives spice to the whole album and then we finish on an uplifting note listening to ‘Sparkling’ and ‘Waiting’, two pleasant little bonus tracks.  So the whole album will appeal both to those who love classic English folk and those who want to get to know the delightful person that is Judy Dyble, a great lady who has been just a little forgotten, which is rather unfair.

CURRENTLY AVAILABLE FROM GONZO
Posted by Jon Downes at 17:08