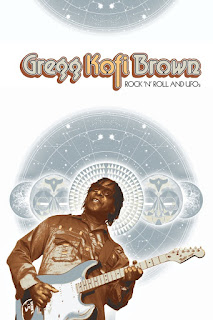 In the wake of the great artists, there are always men of the shadows, tour guides, the musicians, the singers placed on the side, bassists stashed in the back of the stage. In short, the extras, those next to the stars but you can not see, those who exchange pleasantries with Mick Jagger and Robbie Williams but whose name does not appear anywhere, and then little down Poster concert or album cover. Gregg Kofi Brown is one of these men, these moths circling around the headlights of the Cadillac but can be crushed in the general indifference. However, when studying the career of this musician, one realizes that gathered enough experience to write whole books.
Gregg Kofi Brown played with everyone, has been everywhere, seen everything, experienced everything, suffered everything but does not remember him anywhere. His career began in the 70s, when it promotes the first US tour with Elton John. Then he toured with Joe Cocker and Eric Burdon, still in the US. After a first failed attempt to settle in Britain, he finds a time advised by the former manager of the actor Jerry Lewis then finally arrived in London where it is used in musicals (including the famous " Tommy "by the Who). His career sawtooth does go through a lot of groups and genres, marriage, divorce, unemployment, until it finds a stable place at Osibisa , famous Afro-pop group of African musicians and living in London since 1969. Meanwhile, Gregg Kofi Brown participates in many projects by prestigious artists  : Isaac Hayes , Sting , Damon Albarn and even more sensitive groups such as punks the Members or glam-rockers of Hanoi Rocks . The murder of a young Nigerian in London in 2005 is an opportunity for Gregg Kofi Brown participate in a tribute disc that also was Robbie Williams ,Craig David , The Gorillaz , Des'ree , Sting , Miss Dynamite or Gabrielle . what is less known is that Gregg Kofi Brown composed songs in his corner, who never really had the opportunity to be disseminated widely.
Gonzo Multimedia label went snooping in Gregg Kofi Brown drawers to recover a series of songs written and recorded in places, eras and various musicians. The result is this album "Rock 'n' roll and UFOs" , presented as an anthology of unpublished, remixes and demos. Gregg Kofi Brown has played withJohn "Rabbit" Bundrick (Free, The Who), Gus Isidore (Marc Bolan, Peter Green, Peter Gabriel), Dominic Miller (Phil Collins, Sting), Pauline Henry (The Chimes) orTim Hain (Jeff Beck, Jefferson Starship). The unsung heroes among them, in a way.The content of this album is very varied and revolves mainly around funk and African sounds. It is not quite in the pure juice but pleasant rock songs like "How can I" ,"Nkosi B" , "This guy" or "Tricky location" deserve a listen. By cons, we can neglect the techno dance resumption of "Listening to you" the Who, stripped of all its rock salt. So, you are warned. Those who have a little disco or funk fiber lost in the depths of their souls may try to approach this record. As against the other, they wash their teeth with iron filings, they will cash the trick in no time.