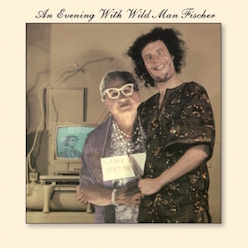 
Wild Man Fischer – An Evening with Wild Man Fischer
Conventional wisdom holds that while Gail Zappa was alive, she prevented reissues of many albums originally released on Frank’s Bizarre/Straight labels. Whether that’s true or not, Gail’s gone now and we finally have a legit reissue of one of the strangest albums from among a strange lot that includes theGTOs, Alice Cooper and Judy Henske and Jerry Yester. This belongs in your collection somewhere near the Shaggs and the Residents: outsider music that – while truly weird – has a kind of bent appeal. Is it exploitation of the mentally ill, celebration of outsider artists, or both? You decide.
Posted by Jon Downes at 16:15