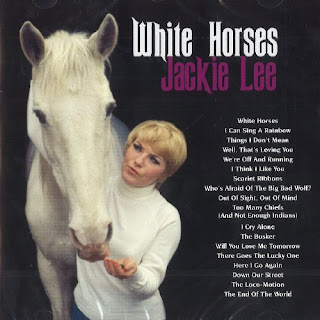 The new 18-song released is named after her most famous single "White Horses" and features an unreleased song, "The Busker" from the album "Calendar," which was also never released. The new compilation begins with the classic sounds of "White Horses" as Jackie had an innocence to her vocals. The gracefulness of her voice is heard on the gentle flow of "I Can Sing A Rainbow" and "I Think I Like You."

She delivers her version of "Who's Afraid Of The Big Bad Wolf?" and lets her vocals soar during "I Cry Alone," before the compilation closes with the addictive pop of "The Locomotion" and the well-known country/pop gem "The End Of The World," which fits Lee's vocal range perfectly. She cut her career short when she retired from music in 1972, citing vocal complications and throat trouble. To find out more about Jackie Lee's new compilation "White Horses," please visit gonzomultimedia.co.uk.