NO BREXIT FOR BANKSY
ART FOR THE PEOPLE BY THE PEOPLE
finds Dismal Land a refugee/Paparazzi revelation
Now ANON (Banksy)has  art of circles and stars
to link Little England to the mainland(and France)
This issue is unresolved,and the People's Will
may re-verse previous disconnection and alienation.
Physically,the Chunnel,Ferries and flights
connect England with Europe locked tight.
Histories of wars,invasions,Dunkirk and intermarriage
means the language of art is love,link and connection.
A for alienation ,B for Brexit (now replaced by B for Banksy)
and you can see France from Dover.Just a short trip
back to the future... 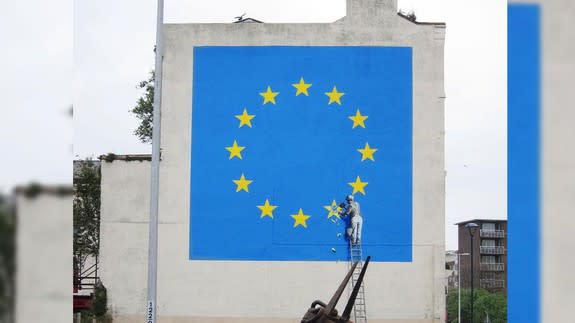 The mysterious street art master Banksy has stepped forward (in his own shadowy way) as the artist behind the massive European Union flag mural that appeared in Dover, England over the weekend.

SEE ALSO: Banksy Sells Original Artwork for $60 in Central Park
Not long after it appeared, many suspected the familiar stencil craft was the work of Banksy. And true to the artist's often understated political commentary via art, the mural shows a worker chipping away at one of the 12 stars on the flag.
The small touch is likely a reference to not only Brexit, but the unfolding election in France, in which Marine Le Pen ran as a candidate intent on following the UK's lead in breaking away from the EU.
Posted by Jon Downes at 05:00