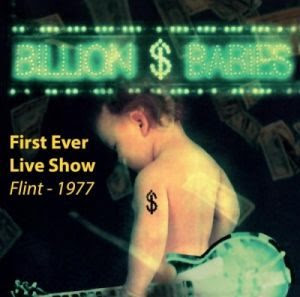 Somehow stupid ... after the band Alice Cooper had settled in Los Angeles in the late sixties and actually managed to get a recording contract with one of Frank Zappa's labels, things started to move forward. Although the first two albums "Pretties For You" (1969) and "Easy Action" (1970) remained like lead on the shelves of the record stores, but at the latest with the disc "Love It To Death" (1971), it was then steep uphill, which includes several platinum albums such as "School's Out" (1972) or even Billion Dollar Babies(1973). As so often happens, when musicians in the studio or tour bus perpetually on the spot, it came at some point to serious personal differences. After the record "Muscle Of Love" (1973), the musicians parted ways to go their own way and record solo albums.
Unfortunately, they never met again and on top of that, lead vocalist Vincent Veneer had the name Alice Cooper legally secured. And then he made - until today, as you know - just solo with hired musicians on. So finally with Michael Bruce , Dennis Dunaway and Neal Smith three of the band members got together again (with Glen Buxton somehow nobody wanted to have anything to do) to start a joint project. It was baptized on trillion dollar babiesand with "Battleaxe" a single album was released in 1977, before the juice was out again. Even the scheduled tour was canceled after not many concerts and this combo was history again. After all, there are rare live recordings and with "First Ever Live Show - Flint, 1977" was now trying to fight against the oblivion of this band.
The disc consists of a total of ten tracks (including two medleys), which are composed of the songs of the studio disc and older Alice Cooper numbers. Okay, in advance it should be mentioned that the sound is more bootleg quality, though not completely catastrophic. It's just not a high-gloss production, which is certainly due to the age of the recordings and the opportunities at that time. In fact, there are fluctuations in volume here and there, which is likely only for real Billion Dollar Babies - / Alice CooperMakes fans interesting. The songs, however, are certainly not from bad parents. "Rock'n'Roll Radio", "Too Young" or "Love Is Rather Blind" are hardcore rockers, but the ballad "Rock Me Slowly" keeps the standard casual.
The tracks 6 to 8, all of which are conceptually related under the title "Battleaxe", were also implemented visually very elaborately on stage. Some even hear fanfares that give you an idea of ​​a dramatic show. And finally, there are the titles of the former band, for example, in a medley together mega hits "No More Mr. Nice Guy" / "Elected" / "Eighteen" / "School's Out" and to conclude the eponymous track "Billion Dollars Babies ".
"First Ever Live Show - Flint, 1977" of the Billion Dollar Babies is a thoroughly entertaining and historically interesting album, albeit not elemental. The great plus is the great enthusiasm of the Americans, the minus of the not optimal sound. It would be almost more interesting if the only studio album "Battleaxe" (which was originally planned as a farewell album of the actual band Alice Cooper - the singer Vincent Veneer did not want to do that) would give another chance.


CURRENTLY AVAILABLE FROM GONZO
Posted by Jon Downes at 11:00