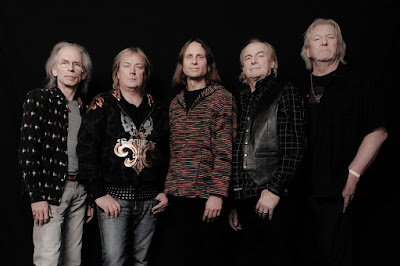 Yes are sharing video of "South Side Of The Sky" as a preview to the forthcoming live package, "Like It Is - Yes At The Mesa Arts Center." Due July 3 in Europe and July 10 in North America, the set presents material from the band's August 12, 2014 show at the Ikeda Theater in Mesa, AZ.


The lineup of Chris Squire, Steve Howe, Alan White, Geoff Downes and Jon Davison were on the road at the time playing dates in support of their 21st album, "Heaven & Earth."
Yes have previously previewed a performance of "Heart Of The Sunrise" from the package, which will be available in 2CD/DVD, Blu-ray and Digital formats - with vinyl to follow at a later date.

CURRENTLOY AVAILABLE FROM GONZO
Posted by Jon Downes at 14:24