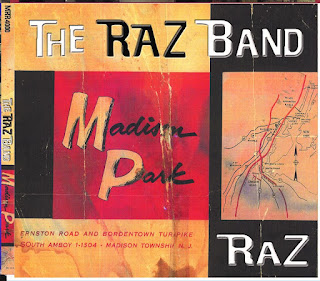 ​​Los Angeles - The R​AZ Band have been toiling in the rock and roll vineyard for longer than you might think. ​Dedicated to the coolest place to ever grow up, ​t​he release of Madison Park  introduces ​T​he RAZ Band to ​a wider ​mainstream audience ​a​nd ​is their breakout album. Band leader Michael ​Raz Rescigno says: “​I'm excited to get our newest album​,​​ ​'Madison Park' out. ​It's a​​ diverse​ collection of music from the last ​few years of our lives. With the tremendous production of​ ​band​ members Joey Molland and Joe Vitale, ​we ​​are looking forward to​​ ​sharing ​our mus​ic with the world.”

The album ​is ​dedicated to the ​New Jersey ​town where ​Raz and his musical partner Hutch grew up. Raz recalls, “Madison Park was a great place to grow up and we have many happy memories from that time of our lives​.​ With that in mind we​ ​created an album that when someone hears it for the first time, the music already feels familiar. Songs that make you smile. ​Music​ that you'll want to listen to over and over.”​

​This is ​the first Raz ​album created with music legends Joey Molland (Badfinger) & Joe Vitale (Joe Walsh/Crosby, Stills & Nash/The Eagles) as ​full ​band members. While​ they've been recording​ together​ for years, this is the first album that was planned to be a​ RAZ​ ​Band album and not a RAZ album, hence, “The RAZ Band”.
​
​The catalyst that led to the Madison Park album was a ​RAZ ​show​ at The Whisky​ A Go Go​ in Hollywood. Their guest performers were Joey Molland,(Badfinger), Gary Duncan,(Quicksilver Messenger Service) & Carla Olson, (The Textones). Raz​ recalls​, “Whenever Joey Molland ​came to​ LA we ​would ​record​​ RAZ songs. This time we recorded Joey's great song, 'Love Me Do' from the amazing Badfinger album 'No Dice'. To add to the fun, Gary Duncan was able to join us for this ​recording ​session.

​”When ​Joe Vitale ​came ​back​ to ​LA, ​​ RAZ ​went​ into the studio to record. “We recorded a new song that we wrote, '$1.50 For Your Love'. ​​After cutting the back tracks with scratch vocals, Vitale said, 'This song is a hit song, and let me tell you, I know what a hit song is'. And of course he does, he co-wrote 'Rocky Mountain Way' with Joe Walsh.

“A couple days later we ​went​ back into the studio with Vitale and recorded another one of our favorite songs, 'Shoot 'Em Up'. This is from Joe Vitale's great album, 'Roller Coaster Weekend'.

“Fast​ forward​ a couple of years and we recorded ​many ​other songs I had been writing​,​​ including a very cool new version of 'Time Marches On' from the album ,'The Best of Los Angeles 1987'. We recorded some oldies that Hutch & I loved as kids​.​ We recorded twenty five songs in all. 'Madison Park' shows many sides of the RAZ musical spectrum and it was made with lots of love and laughs and aha moments.”

“I met the ​Raz almost 40 years ago and he's been knocking me out ever since, the truth is in the songs, I don't think he ever had an idea outside of that idea, so I started playing on his sessions like a lot of other people, we've done gigs separate and together for all those years and here we are with our first record deal, thanks Gonzo, hello world, will anything ever be the same? sure it will, 'cept you'll have the RAZ band to make sure.” - Joey Molland

“​Raz came to some of the Joe Walsh shows and​ my​ solo shows I did as far back as the early 70's....we've been friends ever since...both personally and musically! We've recorded a ton of GREAT Raz originals and yes...miracles can happen....in this century....A RECORD DEAL! Well, being a couple of devoted Beatles' fans, we have a similar sense of 'song'....the RAZ catalogue is massive, current and rockin'! They are ALL fun grooves and great lyrics!! It's GREAT to introduce the RAZ band to the world!” - J Vitale

RAZ ha​s​ opened ​for​ Badfinger, Missing Persons, Berlin​, Marky Ramone, Bill Ward, Iron Butterfly​ and others​. ​Raz ​co-​wrote​ ​songs​ ​with Bobby Hayden​ ​that appear​ in the​ 2015​ bio movie, “The Life, Blood & Rhythm of Randy Castillo”.
​ ​
​Raz​ was musical director for ​the Universal Wrestling Federation ​professional wrestling league, and ​wrote ​theme ​songs for ​the ​wrestlers and​ music for the TV show.

What people have said about RAZ:

“Put RAZ on MTV & they would be immediately elevated to the rock-star position & would be on every FM station.” - Airton Diniz Roadie Crew Magazine

“If you are looking for some good rock and roll, I suggest you check out RAZ. These guys play really good, Real rock music.” - Mark Rasmussen, No Cover Magazine

​“…from the depths of New Joisey, it's street-wise rocker RAZ!” - L.A. WEEKLY

“RAZ is a band with unique artistic vision that has something to say!” - Tramp X-Press College Radio Consultant

“The influence of Badfinger can also be seen on Rescigno's musical style: Bright and catchy Pop as pure as it comes.” - Jay Lustig, The East Coast Rocker

“​It's been said that Los Angeles is the musical capital of the world-no arguments here. Well if you have any doubts, check out 'The Best of Los Angeles 1987, Produced by Michael Raz Rescigno'” - Kevin Coogan, Cashbox Magazine

​In early 2016 ​Gonzo MultiMedia will be releasing “The Best of RAZ”​. Followed by the release of “Razfinger” in the spring. The RAZ Band with Joey Molland & Joe Vitale are planning to perform in Englan​d​​​ and elsewhere ​in 2016 and record a live CD and DVD.

In closing Raz has this to impart, “Live your life. If you truly believe it, you can ​accomplish​ what​ever​ ​it is that ​you want​ to accomplish​. Only you can stop you. Have fun, time marches on, so enjoy it​. Even when it's hard to do, look for something uplifting​, something positive​. Try to be giving. Like John Lennon said, 'All You Need Is Love'.”