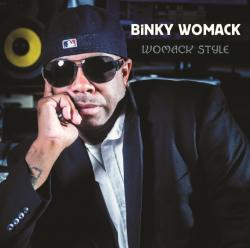 SongWriter, musician, producer and remixer. For a single already a lot of wood. Now, Binky shows Womack the world, which he can also sing and now as an artist and performer still puts a top on it.

He has already produced albums for many well-known artists such as TuPac, KID Frost, Baby Bash, Korn, TLC, Remixes Usher, Prince, Eminem, Westside Connection and many more. He has now produced his own album "Womack Style" in his studio in Burbank, California.

You can expect relaxed RnB sounds as well as rocking songs of high quality as you know from the Womacks already from other songs and productions. An excellent guitar work rounds off the sounds.

There are 12 songs on his album "Womack Style". With songs from the Rock and RnB range, the album is a nice round concept.