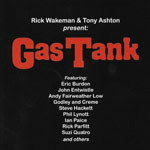 Gonzo Multimedia [Release date 03.03.17]
Where can you hear Rick Wakeman accompanying Rick Parfitt, Alvin Lee and  Phil Lynott  and – no – it’s not at the Pearly Gates.  Back in the early 1980s there was a Channel 4 TV show called ‘Gas Tank’ that ran for six episodes.
Hosted by Rick Wakeman and Tony Ashton (of Ashton, Gardner and Dyke) it was like an eighties “Later with Jools Holland” but not as annoying.  Rick was a far more engaging and certainly less smarmy host.  Wakeman and the house band would accompany any number of rock royalty – including John Entwistle, Eric Burdon and Chris Farlowe – and whilst there was an emphasis on cover versions and “rock and roll” there were a few originals thrown in for good measure.
Wakeman would also interview the artists but these sections are omitted from this strictly music based 3-CD collection although retaining some introductions.  Several of these tracks are priceless: for example Phil Lynott with John Sykes on ‘Growing Up’ and ‘The Man’s A Fool’.
You may well ask: where are the visuals?  Well, last year there was a PledgeMusic campaign when you could obtain a handsome limited edition box set which included the CDs and DVDs, also available separately.  Although signed, the 3-CD set would have set you back the best part of forty quid.
It’s a pity a DVD of the highlights wasn’t included in this latest package which – like many Gonzo Multimedia releases – is terribly packaged.  The inlay is awful with just a selection of photos and the track listing but no backstory.  Where is Malcolm Dome when you really need him?
A quick gander at YouTube reveals several clips including one where Rick Parfitt sheds light on the beginnings of Quo and their ethos, with an amusing interlude when he divulges to Rick the name of his original band.
A curio, and worth checking out for completists and those interested in specific artists.  And, wait a minute, there are even four tracks featuring Steve Hackett, one called “Hackett’s Bogie”, and two when he plays harmonica with Suzi Quatro.  Priceless.  ***
Review by David Randall
David Randall presents ‘Assume The Position’ on Get Ready to ROCK! Radio every Sunday at 22:00 GMT.
CURRENTLY AVAILABLE FROM GONZO
Posted by Jon Downes at 06:00