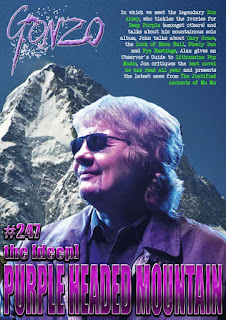 In which we meet the legendary Don Airey, who tinkles the ivories for Deep Purple (amongst others) and talks about his mountainous solo album, John talks about Cary Grace, the Luck of Eden Hall, Steely Dan and Pye Hastings, Alan gives an Observer’s Guide to Lithuanian Pop Music, Jon critiques the best novel he has read all year and presents the latest news from The Justified Ancients of Mu Mu.

And there are radio shows from Mack Maloney, Strange Fruit, Canterbury sans Frontieres and Friday Night Progressive. We also have columns from all sorts of folk including Roy Weard, C J Stone, Mr Biffo, Neil Nixon and the irrepressible Corinna. There is also a collection of more news, reviews, views, interviews and numbats with the right to choose (OK, nothing to do with small marsupials who have become eligible to vote, but I got carried away with things that rhymed with OOOOS) than you can shake a stick at. And the best part is IT's ABSOLUTELY FREE!!!

All issues from #70 can be downloaded at www.gonzoweekly.com if you prefer. If you have problems downloading, just email me and I will add you to the Gonzo Weekly dropbox. The first 69 issues are archived there as well. Information is power chaps, we have to share it!
You can download the magazine in pdf form HERE:

SPECIAL NOTICE: If you, too, want to unleash the power of your inner rock journalist, and want to join a rapidly growing band of likewise minded weirdos please email me at jon@eclipse.co.uk The more the merrier really.