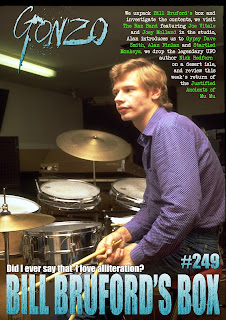 Gonzo Weekly #249
THE ON THE RAZ WITH BILL ISSUE
http://www.gonzoweekly.com/
We unpack Bill Bruford’s box and investigate the contents, we visit The Raz Band featuring Joe Vitale and Joey Molland in the studio, Alan introduces us to Gypsy Dave Smith, Alan Finlan and Startled Monkeys, we drop the legendary UFO author Nick Redfern on a desert isle, and review this week’s return of the Justified Ancients of Mu Mu

And there are radio shows from Mack Maloney, Strange Fruit, and Friday Night Progressive. We also have columns from all sorts of folk including Roy Weard, C J Stone, Mr Biffo, Neil Nixon and the irrepressible Corinna. There is also a collection of more news, reviews, views, interviews and antichinuses attracting a chorus of boos (OK, nothing to do with small marsupials who have become unpopular for some reason, but I got carried away with things that rhymed with OOOOS) than you can shake a stick at. And the best part is IT's ABSOLUTELY FREE!!!

All issues from #70 can be downloaded at www.gonzoweekly.com if you prefer. If you have problems downloading, just email me and I will add you to the Gonzo Weekly dropbox. The first 69 issues are archived there as well. Information is power chaps, we have to share it!

You can download the magazine in pdf form HERE:
http://www.gonzoweekly.com/pdf/

SPECIAL NOTICE: If you, too, want to unleash the power of your inner rock journalist, and want to join a rapidly growing band of likewise minded weirdos please email me at jon@eclipse.co.uk The more the merrier really.

* The Gonzo Daily is a two way process. If you have any news or want to write for us, please contact me at jon@eclipse.co.uk. If you are an artist and want to showcase your work, or even just say hello please write to me at gonzo@cfz.org.uk. Please copy, paste and spread the word about this magazine as widely as possible. We need people to read us in order to grow, and as soon as it is viable we shall be invading more traditional magaziney areas. Join in the fun, spread the word, and maybe if we all chant loud enough we CAN stop it raining. See you tomorrow...

* The Gonzo Daily is - as the name implies - a daily online magazine (mostly) about artists connected to the Gonzo Multimedia group of companies. But it also has other stuff as and when the editor feels like it. The same team also do a weekly newsletter called - imaginatively - The Gonzo Weekly. Find out about it at this link: www.gonzo-multimedia.blogspot.co.uk

* We should probably mention here, that some of our posts are links to things we have found on the internet that we think are of interest. We are not responsible for spelling or factual errors in other people's websites. Honest guv!


* Jon Downes, the Editor of all these ventures (and several others) is an old hippy of 58 who - together with a Jack Russell called Archie, an infantile orange cat named after a song by Frank Zappa, and two half grown kittens, one totally coincidentally named after one of the Manson Family, purely because she squeaks, puts it all together from a converted potato shed in a tumbledown cottage deep in rural Devon which he shares with various fish. He is ably assisted by his lovely wife Corinna, his bulldog/boxer Prudence, his elderly mother-in-law, and a motley collection of social malcontents. Plus.. did we mention Archie and the Cats?
Posted by Jon Downes at 16:25