Graham's slightly-belated Gonzo review of the Southampton Hawkwind gig - apologies for the delay...

Yep, I tell it like it is, when reviewing Hawkwind.

I gave them a savage panning on Prog Archives back in 2007, for instance; however, I've been increasingly complimentary ever since. Which brings us to 2012............

At Southampton, I sometimes had a feeling of cosmic energy from them that reminded me of their golden age of the 1970s. And that is something that I just haven't said about them for the last thirty years.

One could almost see the power of the band pulsating from the stage and washing over the audience in cosmic waves. 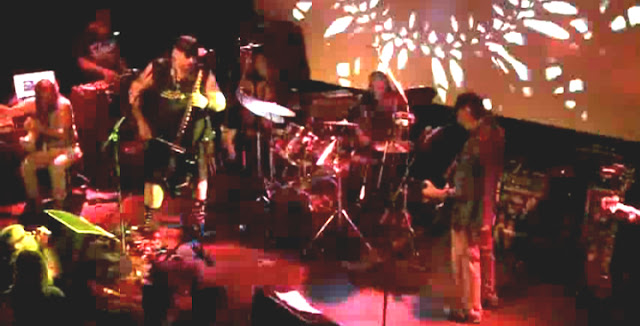 Hawkwind 2012: Tim Blake (seated), and behind him is Dead Fred on keys, Mr Dibs is the guy in the hat and kilt. Richard Chadwick's spent over 20 years on that drumstool, and Dave Brock is towards the right. Nial Hone is out of shot in this view.


(Screenshot courtesy Lostjohnnie, who's put several excellent video clips of this event on youtube and said I can copy his stuff. Cheers, man.)

Things got off to a good start earlier, necking back some jars, and with Huw Lloyd-Langton playing solo strummity-strum support.

Solo... except that Dave Brock joined him on stage for a while.

Huw had some sound problems, so Dave turned roadie for a moment and brought over another microphone, to some cheers from the audience...

(This is a frame-grab from my videoclip of the event) 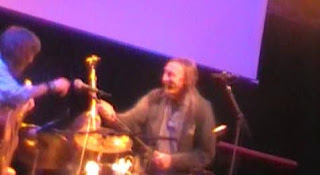 ...and he soon played harmonica too.

Huw also did stuff like "Outside the Law" and "Hurry on Sundown" and I divided my attention between these and a couple more pints.

I'd met a friend from previous Hawk-gigs, Julie - and we spent much of the intermission discussing the Hawks and also our plans for refreshments, and I was well refreshed by the time Mr Dibs started his electric cello noises for the start of the narrative "The Awakening".

This Bob Calvert space poem dates from the very early days and the next track, "You'd Better Believe It" isn't much newer - it first surfaced on vinyl on "Hall of the Mountain Grill".

Not that I object to old numbers, of course... they're a bit like the slippers one wears when drinking one's cocoa at night - familiar and comfortable.

The next few tracks were considerably newer, being from the "Onward" album released earlier this year. New shoes can pinch a bit until one's walked around in them for a while, but the Hawk-meisters still have ideas, and don't just want to sit back and rest on their laurals, so that's ok.

At Bridport a week previously, I'd been hoping they'd do their new track "Computer Cowards" but tonight I wasn't expecting it, as Hawkwind seldom vary their main setlist during a tour.

My personal theory is that they thoroughly reherse a core group of numbers and then basically stick to that list.

On that list for both Bridport and Southampton was the mid-set cluster of "Hassan-i-Sahba", "Love in Space", "Sonic Attack", and "Cities". The last-named, a new one, reminds me of "Brainbox Pollution" crossed with "Back in the Box" and which also contained the main "Brainstorm" riff towards the end, for good measure.

Being able to hear Dave Brock clearly in the mix makes a BIG difference, and I could hear DB really quite well, both at Bridport and at this gig. Hooray!

I think it was during "Sentinel" that Julie went off on a trek through the mosh-pit area for some reason that I can't now recall. I soon got left behind, and eventually went off to the bar and then the balcony. Looking at the gig clips on youtube, I must have ended up standing right behind Lostjohnnie, but of course I didn't realise that at the time - then, he was just a bastard whose head was in the way!


This is a wonderous vid clip by Lostjohnnie, who's caught Hawkwind at a point when they are, well, fairly charged with cosmic energy.... it's "Sonic Attack" followed by the new track "Cities".


Anyway, the Warrior album was getting a look-in by the time I had got a fresh pint at the upstairs bar, with "Assault & Battery" / "Golden Void". And "Damnation Alley" was the closing track of the main set.

After some foot-stamping for the encore, the band returned for an excellent "Psychedelic Warlords" and then drummer Chadwick revealed that the only reason he joined the band was so that he could sing "Silver Machine"...! He was in luck tonight, then, as that was what the band performed. They didn't do that one at Bridport, a week earlier.


Outside the venue, I sat on the pavement and had a few cigarettes as I lazily watched people coming and going from the tour bus. After a while, my concert-going friend from previous Hawk-gigs rejoined me, and told me she wanted a photo of Dave. In fact, Julie ended up getting a photo of herself with Dave, and posted it on Facebook. Nice one, that lass!

At one point, Mr Dibs called out a greeting to us lot from an upstairs window, and Nial also came over and had a chat. I was too incoherent to say much, but I was pleased to see a new Hawkwind fan, who's only 18, joining in the fun and hanging around that side-street to see a few members of the band.

I know him from the Hawkwind forum and from previous gigs, and it's great to see youngsters still getting into a band who were first attracting fans over 43 years ago. I was at school when I heard "Silver Machine" get in the charts and I never imagined then that I would be a Hawkwind fan for all of my adult life.

There have been many good years and the odd few shite bits, but generally there's nothing to match it, when Hawkwind roll into town and kick some cosmic ass. And they sure kicked ass in Southampton 2012.

-Graham, aka Sonic_Hawk on Dime