SONG BY SONG: 'California Star' by Martin Stephenson and The Daintees (Part Two) 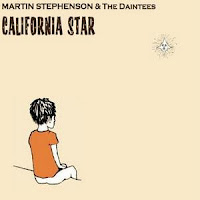 Yesterday we started a new feature here on the Gonzo Daily. It is called 'Song by Song', and it does exactly what it says on the tin. Basically I go through an album song by song, and then pass my notes on to the artist who made the album in the first place, and see what they have to say. And we start off this exciting new series with the irrepressable Martin Stephenson and his smashing new album California Star:

JD: The title song of the album has an immediately infectious tune and deceptively simple words, which have been going round and around my head ever since I first heard it. . Once again I am struck by the kindliness and gentleness of Martin Stephenson’s vocals. I was struck by what a nice man he was when I interviewed him the other week, but on several of these tracks he manages to communicate this easily in the way he sings.

What is particularly impressive about this song is that whereas most songwriters manage one hook for the verse, and if they are lucky another one for the chorus, Martin sprinkles memorable hooks across his songs with gay abandon. Bob Dylan is reported to have claimed (as I said in a review of David Dalton’s biography of him the other day) that each line of A Hard Rain’s Gonna Fall is actually the start of another song. Well the same could be said about the melodic hooks on ‘California Star’.

MS: This song was a blessing to Mickey Rourke written when he was suffering, the music was written in a blink and again, could have easily been just one guitar. The engineer played lead acoustic guitar on it, so Im not really fussed who plays what, as long as its in the ball park, The song is also about my time in Hollywood working with Russell Kunkel and being signed to Capitol, Chateux Marmont etc

JD: Just when you weren’t expecting it, Stephenson changes pace entirely with a harmonica and guitar driven rocker that sounds of all things like classic Thin Lizzy. How does this man do it? He seems to put out such things effortlessly. It’s time to move on he claims. Why? You are doing perfectly well here.

And then just when you think the song is over, there is a storming reprise and a burst of his irrepressible North Easterh humour. Wot a star!

MS: Yes its pretty much a fun band song this, with not much intelligent content, features the wonderful Stevie Smith from the band ‘Ruthless Blues’ the wee cheeky cockney

JD: And then he changes pace once again with an acoustic country ballad featuring jaunty fiddle and mandolin, and the cheeriest whistled hook I have heard for many a year. It is a lovely song of childhood and murder, that really defies categorisation, and has a hook to die for. If I had to give any musical analogy, believe it or not it would be the Irish republican folk group The Wolfetones. Now, don’t get me wrong, I am not making any political similarities at all, but the jaunty tune married to the grim subject matter has a few similarities.

And the heavily reverbed whistling coda is amazing.

MS: Yes this song is all about a curse, and the request to not be a killer granted to the victim.

This series will continue, and we shall be revisiting martin's fantastic album with what (in the good old days) would have been side two in a few days time. In the meantime check out his Gonzo artist page...