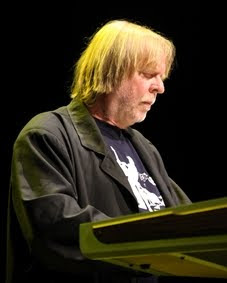 Rick Wakemana , this virtuoso of synthesizers, piano master of mood, co-founder of numerous masterpieces that have passed into the canon of symphonic rock, and, perhaps above all, an icon of British popular music, you do not have anyone present.Anyway, I'm not going to do, because this review rozrosłaby confident to record size. But I want to draw attention to the latest album by this artist. The latest, though containing archival (as of 2003) live recordings made ​​by our hero with an accompanying band The New English Rock Ensemble. The composition of TNERE there were long-time colleagues Rick: vocalist Ashley Holt and drummer Tony Fernandez, and the senior young musicians: guitarist Ant Glynne and bassist Lee Pomeroy (now playing It Bites and the new team of Rick Wakemana son, Adam, Headspace).

In 2003 in this very personal configuration gentlemen went on tour to promote issued a little earlier a good rock album "Out There" . And it works derived from it are the main point of the program are issued album "In The Nick Of Time - Live 2003".Although they were not alone. You should know that all starts with the theme "Catherine Parr" of the famous "Six Wives of Henry VIII" and the rest of the concert we also find many other compositions of the artist's most memorable records. So we heard here include excerpts from the album "No Earthly Connection", the title theme from "Olympic" soundtrack "White Rock", and even here stretched to nearly 10 minutes yesowski about the "Wurm", which is part of the famous composition "Starship Trooper" with "The Yes Album," perhaps the most remembered as a brilliantly executed finale trzypłytowego memorable live album Yes, "Yessongs" (1973).
As I mentioned, most of time for their gigs to promote the album "Out There" took it from the compositions. Well, I must admit that they are strong (in my humble opinion, the strongest) points the entire concert. Though probably be some who are used to study the originals will complain a little different from their vocal interpretation by Ashley Holt (the prototype of a studio singer Damian Wilson).

Someone once counted the albums under the name Rick Wakemana is already a total of 120 (sic). But even the biggest fans of his work, one of the outstanding and timeless probably include a few: "The Six Wives Of Henry VIII" , "Journey To The Centre Of The Earth", "The Myths And Legends Of King Arthur And The Knights Of The Round Table "," White Rock "," Criminal Record "," 1984 "," Return To The Centre Of The Earth "(me to this list today dorzuciłbym repeatedly cited" Out There "). I wonder which of his concert discs could be classified as the most outstanding. And guess what? In memory I can not find a better and more cross-cutting music collection Wakemana live than be discussed today by me album. Therefore, I strongly recommend release "In The Nick Of Time".

"In The Nick Of Time" is an album that contains material recorded even though nearly 10 years ago, is published in accordance with its title at the perfect time. This lasted just over an hour video shows the rock face of Rick Wakemana. Maybe he really liked, because the concert heard on the album Rick was in exquisite form, and often gave expression to the audience with their masterful kidnapping game for disaster and enthusiastic response. Album is a good review of the best accomplishments of the pianist in the live version as well, especially for beginners in his music, can provide an excellent introduction to his work. The more that the value of this release increases the carefully prepared booklet. It contains not only details of the recording program to fill the album, but a thorough biography of the artist and accompanying musicians, as well as a large, somewhat philosophical essay by our hero, throwing much light on his views on the circumstances shaping it as a rock musician , the sequence of the creative process leading to the formation of the timeless musical works from his participation ...

Music CD to listen to the disc, the accompanying booklet to read. Overall, for fans of Rick Wakemana thing is priceless.
Posted by Jon Downes at 11:28