I have been trying to interview Don Falcone from Spirits Burning for weeks, but every time I tried something happened. We had technical problems, health problems, family problems and even times when I needed to be dealing with various arcane animal related issues from my day job, but eventually we got together through the magick of those jolly nice people at www.recordyourcall.co.uk but for whom I really would not be able to do a lot of what I do.

I started off by apologising...

JON: Sorry it has taken so long to get to you… every time I try something happens


DON: The timing is kind of good – this week the CDs arrived; the artist copies so I actually feel like it is more real because I have a physical copy I can listen to it, and look at it and all that.

JON: Well I sat down with my dog last night and listened to the album.  It is very good. It is the first time I have actually heard it

JON: It is probably actually a good thing that I had to wait until today to interview you, because until last night I had no real idea of what it was all about. 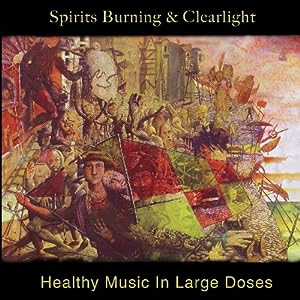 DON: Yeah every Spirits Burning CD is kind of different. There is a consistency maybe with the concept and that I’m involved, but one CD might be instrumental, one might be more vocal. There is one CD I tried to do my effort almost to do Rock in Opposition, and another one more space rock, and the Bridget Wishart albums have a festival element to it.

JON: So tell me, what is the guiding concept?

DON: The original concept was to basically celebrate space rock and so what I did was, I put out a call – I guess it was in 1997 – to a number of musicians to say would you be interested in gathering and celebrating space rock?

And what I think has developed over that time given some of my interests, and then also what I kind of perceive as the openness and possibilities of space rock, and that includes everything from synth and electronic music. There is a folk and a blues aspect in some space rock, prog rock and art rock and then if you take it a little further, what some might call experimental music.  So at some point I think it has become a celebration of music possibilities and then the other side of it, I was real influenced and also a big fan of the Brian Eno albums, especially the early ones and things like Bob Calvert,  places you’d have these interesting  combinations of people.

Kind of unexpected combinations, so you’d have the more art rock, Roxy Music kind of people and Fripp from heavily respected King Crimson and you’d have members of Hawkwind and The Pink Fairies, and you’d get these kind of happy accidents.  I really wanted to see what I  could do bringing together people who you wouldn’t normally see coming together.  I wasn’t in the position of – financially – of bringing in big name players, so we’d end up having a combination of some people from more known bands of the ‘70s and the ‘80s, and then some people from bands who were influenced or liked those people and so you would have bands that were kind of up and coming – let’s say at that period of time, late ‘90s early 2000s – so you have this interesting mix of past skilled musicians and a kind of fresh take on it.

DON: A little bit of both.  I have a home studio which is basically an extra room in the house here that has a Pro Tools system and I used to work for Digidesign for 11 years so I was kind of able to be on the cutting edge of inheriting equipment, and there was another system I used way back before I worked at Digidesign and people like Daevid Allen used to visit the bay area here in – you know we are pretty close to San Francisco – and he used to visit once a year and he would actually record here. But the majority of musicians are actually scattered across the world so there’s a – I think on the newest CD, there’s 10 to 15 people from outside the .  Either in South America, or , and then there’s others.

I think that another thing that has happened  is that there’s a number of people who used to live in and who have moved away. What’s happened, going back to the old days, some people long distance, would send me DAT tapes – it could go both ways also.  I could start a tune, then send them something, and they would record their track, or I could actually have them start a tune and they would send me something first.  But in the old days, which were not really that long ago, we’re talking maybe 14/15 years ago, the majority of people were communicating with DAT or CDRs. Nowadays, it is more likely that people are posting to places like Dropbox or YouSendIt or SendSpace. For example, the person starting the piece can post a *.wav or *.mp3 to get the initial track started, to hear it.

Which seems an appropriate place to leave it for today. More tomorrow...