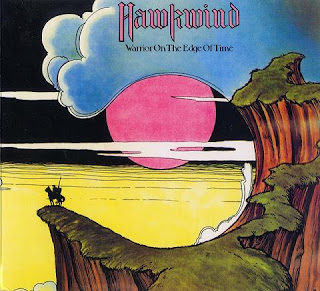 Atomhenge (a Cherry Red Records label) have confirmed that the classic Hawkwind album “Warrior on the Edge of Time” will be released in May 2013 as a newly remastered edition from the original stereo master tapes.

Gonzo suggested on 18 January that  the forthcoming May album release could well be that "Warrior" album.

Atomhenge label manager Mark Powell said: “Contrary to popular myth, the master tapes of this classic album were never lost. They remained in the United Artists vaults. The Atomhenge reissue will be the first ever CD edition to be taken from the original first generation master tapes. All previous editions have been taken from vinyl transfers or inferior copy master tapes”.

Atomhenge say that, aside from a single disc remastered edition, there will be two other expanded editions of the album.

Mark Powell again: “I’m extremely pleased to say that Steven Wilson has mixed the album into a stunning 5.1 Surround Sound mix from the original multi-track master tapes and has also undertaken a new stereo mix of the album which has an amazing depth and clarity whilst remaining faithful to the original release. “Warrior” is one of THE classic albums of the 1970s and is a land-mark album in Hawkwind’s history. The forthcoming reissues will do justice this magnificent record”.

Full details of the editions of “Warrior” will be announced in the coming weeks.

Cherry Red managing director, Adam Velasco added; “The album “Warrior on the Edge of Time” has been unavailable officially on CD for many years and it is our intention to make the forthcoming releases definitive editions in terms of audio remastering (from the original master tapes), content and packaging”.


Hawkwind will be touring in April 2013 performing the "Warrior" album, with further dates planned later in the year. Confirmed dates so far are:

Email ThisBlogThis!Share to TwitterShare to FacebookShare to Pinterest
Labels: Hawkwind