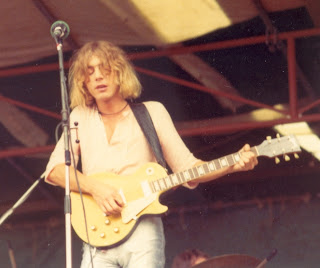 "YOU CAN'T SHINE IF YOU DON'T BURN!"
(Kevin Ayers-gone Feb 18,2013
John Peel called him the most important underacknowledged musical innovator in contemporary Britain
WILDE FLOWERS morphed into SOFT MACHINE(Thank you,William Burroughs!),
playing@the UFO Club with Syd Barrett's PINK FLOYD.Played the PROMS!
Toured America in 68 with JIMI HENDRIX(who gave him a Gibson guitar)
Played with BRIAN ENO,MIKE OLDFIELD,JOHN CALE,ROBERT WYATT.NICO,ZOOT MONEY,
and many luminaries of the "Canterbury scene"(CARAVAN,EGG,GONG etc)
and i am sure i saw him @Gong's 25th in London,if not the UNCON(Amsterdam)
17 solo records later,a friend to heroin and early LSD-but a better musical innovator,
he attracted the attention of SONIC YOUTH and TEENAGE FANCLUB.
Frequenter of Deia,Majorca,went recluse ,ended up in Montolieu("Village of Books")
I knew a young Ayers follower who sought to arrange solo tours for Kevin
But Kevin knew too much about rock star ripoffs.He would not play the game.He would not play
His last UNFAIRGROUND gained "critical acclaim".He withdrew(again)
Leaving a little of his light for us to play -a SOFT MACHINE of missed fame
Solo.He became solo.His songs found homes among us still-and will...
Posted by Jon Downes at 19:07