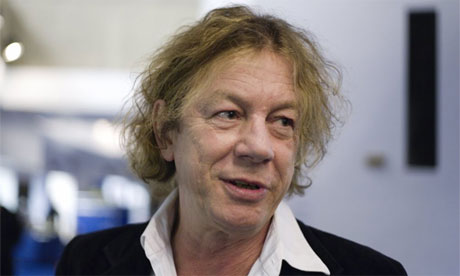 'I can't write songs unless I'm in love' … Kevin Ayers. Photograph: Marc Broussely/Redferns
There are poppy fields above the city of Carcassonne in south-western France, and quiet houses with windows so tightly shuttered they appear to be in a permanent state of repose. The higher you get up the mountain, the closer the air becomes; there's a place where the road forks into two – a little scrap of fenced-off land in the middle planted with fruit trees and a hammock strung up in the shade. It is here, on an afternoon like this, that if you're lucky, you might catch a glimpse of Kevin Ayers.
Ayers has been living in voluntary exile in France for longer than he can remember; something about England never sat right with him. Forty years ago, when Soft Machine released their first album and toured the world with Jimi Hendrix, Ayers – lead vocalist and bass player, then 24 – gave up and fled to Ibiza. There, he later said, he "lived on nothing – fruit from the trees and the fish that I caught every day". His first solo album, Joy of a Toy, was a piece of psychedelic whimsy with songs such as Eleanor's Cake (Which Ate Her) and The Lady Rachel, while the demos for his first single Singing a Song in the Morning, originally featured Syd Barrett – although by the time it came to the final cut, the ex-Floyd frontman was too far into his mental meltdown to remember the chords. The Whole World, a band featuring a young Mike Oldfield on bass, was assembled for a second LP, Shooting At the Moon, and Ayers was back in the limelight, hailed as a new David Bowie. He cancelled the promotional tour after a few dates, though, and aborted the group just as it was taking off.
Read on...
Posted by Jon Downes at 12:11