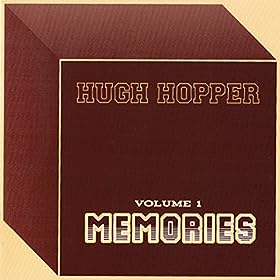 HUGH HOPPER
Memories / Franglo Band
Gonzo
In case you don’t know, the late Hugh Hopper started his musical career in 1963 as the bass player with the Daevid Allen Trio alongside drummer Robert Wyatt, with all three ending up in a little known beat combo called Soft Machine. They had an interesting history, developing rapidly from a psych pop band into legends of jazz rock.

After Hopper left the band, he continued to work in the genre, with the likes of Isotope, Gilgamesh and Stomu Yamashta, as well as a serious of collaborations with fellow Soft Machiner Elton Dean. And what we have here are the first two installments of a ten part series compiled by Michael King. And it’s, um, interesting.

The first CD is likely to be the most popular, with Soft Machine fans always keen to get their hands on material, and this sees things like a 1969 demo of ‘Memories’ with Mike Ratledge on piano / organ and Robert Wyatt, drums / vocals popping up, alongside much later material, primarily from the 21st century. I doubt anyone would listen to ‘Long Piece’, credited to Hugh Hopper Computer Collage more than once, but the Franglo Band material is very listenable.

Over on Volume 2, it’s all Franglo Band, recorded at a Paris show in 2004, and it is a real treat. The band really do set out on a musical exploration across numbers like ‘Facelif’, ‘Sliding Dogs’ and ‘Shuffle Demons’, with a guesting Didier Malherbe adding some Gong on one number. This is the one to buy.