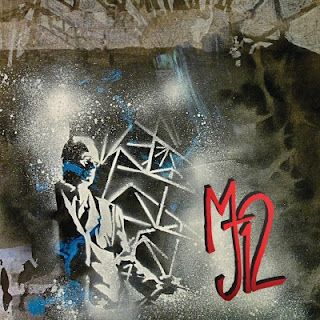 MJ12 gets their name from a supposed organization called “Majestik 12” which was supposedly convened in the 1940s to investigate UFOs. While that group might be purely mythological (or perhaps not), this group is very real and very cool. This MJ12 is made up of four musicians. Percy Jones in the bass player. He’s best known perhaps as a member of the group Brand X (a band that’s recently reunited with Jones once again handling the bass work). He has also played with artists ranging from Suzanne Vego to Soft Machine, Brian Eno, Steve Hackett, Ray Harper and more. Playing drums and trombone, Stephen Moses was part of the “loft jazz scene” in New York City. Guitarist David Phelps is currently a member of The New York Hieroglyphics and has his own band. Saxophonist Chris Bacas has played with the likes of the Glen Miller Band, The Tommy Dorsey Band, the Artie Shaw Band, and Buddy Rich’s legendary Big Band. Together these guys create a brand of instrumental fusion that’s sometimes spacey, sometimes bombastic, and always cool. I’d say there is enough rock here to consider this prog rock, but either way, we generally land fusion under prog at Music Street Journal.


Percy Jones’ bass is purely on fire as the rhythm section leads out here. Other musical elements come over the top bringing a sense of mystery along with some great fusion. This continues to evolve, getting harder rocking as it does so. They drop way down for a mellower movement mid-track and then fire out into some seriously incendiary stuff from there. Then an even more sedate movement takes over between the five and six minute marks. That portion has a bit of a space element. At it continues a police siren is heard. That sound continues as the cut works out into scorching hot fusion to take the tune to its close.

Bad American Dream Pt2
Bass begins this piece, too. In contrast to the opener, there are no drums for almost the first minute of the piece. Instead atmospheric spacey layers are heard over the top. This piece continues to build, but remains mellower and rather trippy. It’s also slow moving. Around the three minute mark, it finally explodes out into more rocking territory. There are both Americana and psychedelic rock elements in the mix on this segment. As it continues to evolve there is some amazing fusion jamming.

Magic Mist
Mellower and trippy at the onset, this has a real space meets psychedelia and world music element to it. The bass joins after a bit and begins soloing. This thing gets quite freeform as it continues. It has a tendency toward noisy edges, and minor chaos, but yet is oddly accessible and mainstream at the same time. This definitely has a lot in common with Rock in Opposition.

Talk Time
This is a cool energized jazz jam. It’s definitely a bit odd in the way it seems to shift this way and that. But, it’s a good form of oddity for sure. This is a killer fusion tune that works quite well.

The Wow Signal
Another that’s more rocker, this has some killer jamming built into it. There is a rather mysterious tone in some ways, too. I love the energized groove to the piece. There are parts of this that actually approach heavy metal. Yet, mostly this is some powerhouse jazzy prog with plenty of surprises.

Big Daddy Road
Space music, jazz and more merge on this cut. It has some particularly traditional jazz trappings. All of that, though, gets countered by some space elements. There is a freeform wandering quality to some of this, too. It’s packed (as the whole album is) with some killer instrumental work.

The Phantom Maracas
Although this is more pure jazz in nature, it’s also rather freeform. It has some intriguing changes. It gets really fierce later, too.

Guns and Pussy
This is such a killer jam. It’s definitely on the prog end of the fusion spectrum. It’s packed with killer twists and turns. It also has some amazing instrumental work.

Magic Mist Reprise
One would expect this to be similar to the original song, and it is. This is truppy stuff that’s quite cool.

Percy Jones (born December th, 1947 near Llandrindod Wells, Wales) is a Welsh bass guitarist, and was a member of jazz fusion band Brand X from 1974 to 1980, as well as a reformed version that lasted ..

Percy Jones Ensemble
Percy Jones (born 3 December 1947 near Llandrindod Wells, Wales) is a Welsh bass guitarist, and was a member of jazz fusion band Brand X, from 1974 to 1980, and..