Shoreworld: The Raz Band – The Best Of Raz 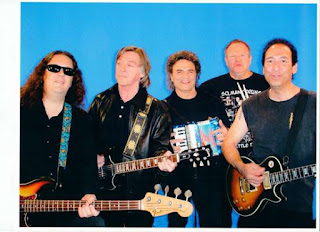 
Michael Raz Rescigno has been involved with music most of his life. Starting over 32 years ago, Raz (as he likes to be called) has stayed deep in musical experimentation and performance-based expression in his quest to achieve excellence and harmonious interaction with his musical partners.

His latest project is a “Greatest Hits” starting in 1984 and going straight through to 2015 when he released his most recent full-length, Madison Park, under the Raz Band moniker. Raz states that “Madison Park was a diverse collection of music from the last few years of our lives.” With production direction from friends and now full-time band members Joey Molland (Badfinger) and Joe Vitale (Joe Walsh, Crosby, Stills and Nash and the Eagles), Raz and company forged ahead and ended up with an excellent 16-song platter that took them to an entirely different level as a group and as writers and producers.

Following the November 2015 release of the critically acclaimed Madison Park by The Raz Band, Gonzo Multimedia has just released The Best Of Raz. This career-spanning CD takes the listener on Raz’s 32-year musical journey and features songs beginning with Raz’s critically acclaimed 1984 debut record, Criminals Off The Streets, through Gonzo’s 2015 release of Madison Park.