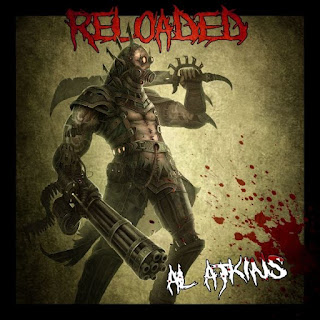 English singer Al Atkins recently released his new solo album titled "Reloaded." Atkins is best known as the original lead singer of Judas Priest before Rob Halford took over the vocal duties. Atkins new album was released on the Gonzo Multimedia label and features eleven re-recorded tracks from throughout Atkins 40 year career. The new album also features Judas Priest bassist Ian Hill who performed with Atkins in the early days of Judas Priest.
The new album begins with the heavy metal groove of "Winter" from Atkins fourth solo album, "Victim Of Changes." The song originally appeared on Judas Priest debut album with Halford on lead vocals, but was written by Atkins along with Ian Hill and KK Downing. Next up is the exciting guitar-driven melody of "Mind Conception," which appeared on Judas Priest's 1971 demo. Atkins returns to his 1994 album "Heavy Thoughts" to bring out "A Void To Avoid" as he pushes the song close to the ten-minute mark with electrifying solos from Tsuyoshi Ikedo and Stu Marshall. You can hear Atkins influence on early Judas Priest albums with the chugging hard rock of "Never Satisfied" and "Victim Of Changes," which includes Ralf Scheepers on vocals along with Roy Ramirez and Paul May guitar solos. The hidden gem on this new release is the addition of "Mind Conception" from Judas Priest's original 1971 demo. The recording is a little rough, but is definitely a welcome addition to this release. To find out more about Al Atkins and his new album "Reloaded," please visit his Facebook page at facebook.com/ALATKINSOFFICIAL.
Posted by Jon Downes at 15:42