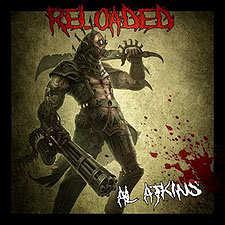 
For those not in the know, Al Atkins is a British heavy metal vocalist, best known for his association with a very early incarnation of Judas Priest. Indeed, it was actually a whole other named band that had formed in the West Midlands area in 1969 fronted by Atkins, that bassist Bruno Stapenhill renamed Judas Priest. The band played their first gig on 25 November 1969 and disbanded in April of 1970. The band was subsequently reinvented, but without Atkins and company.
As of 2012, Atkins has fronted the band Atkins/May Project, which also features guitarist Paul May. Atkins has also contributed session vocals for the heavy metal opera project, Lyraka and in 2013, and now Atkins brings forth a brand new solo album entitled Reloaded. A 10 track collection of his favorite songs written between his days in Judas Priest to the Holy Rage days (2010), Reloaded is coming out via Gonzo Multimedia.

Featuring special guest appearances by Ian Hill of Judas Priest (who actually performed on the original recordings of some of these classics), John McCoy (ex-Gillan), Ralf Scheepers (Primal Fear) - who duets with Al on "Victim Of Changes" - a solo from Roy "Z" Ramirez of Halford, Japanese guitarist Tsuyoshi Ikedo from Unveil Raze, Australia's Stu "Hammer" Marshall of Death Dealer, Chris Johnson from Holy Rage, Rob Allen on drums, and longtime friend and collaborator, guitarist and producer of many of Al's albums, Paul May.

Phew! So, with all these tracks having appeared in various forms on many albums over the past forty years, what Reloaded does is bring to the fore the Al Atkins of today to re-embody the spirit that they had originally been created with. To reinvigorate them. To re-birth them for a whole new generation.
As for the album itself musically, every song is what you would expect to hear from Atkins. He still has his vocals, he still has that Judas Priest lyrical and musical vibe about him, and Tsuyoshi Ikedo's guitar work is simply stunning. Rob Allen's drumming it tight throughout, and I also loved the solo from Roy "Z" Ramirez on the last track "Victims Of Changes".

In fact, Reloaded also features a bonus track that is an excerpt of a guitar solo from the very first Judas Priest demo, "Mind Conception" featuring Hill on bass and K.K. Downing on guitar. Now that's a gem of a never-heard treat for all Judas Priest fanatics if ever I heard one!
Also, and for a limited time only, Aktins has teamed up with PledgeMusic.com to offer his fans some very special Reloaded packages. Aside from just ordering a digital download of the album upon its release, you can order signed Reloaded CDs, tshirts, hoodies, signed posters, and even a hand-written lyric sheet from Atkins!
www.facebook.com/ALATKINSOFFICIAL