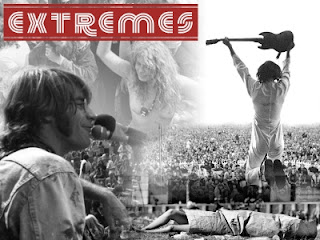 EXTREMES: FEATURING MUSIC FROM SUPERTRAMP & VARIOUS ARTISTS
10/10/2017
In the 'golden' sixties, youth shook off the conservative yoke and enjoyed the conquered freedom in full. Two selfmade singers, Tony Klinger and Michael Lytton, 19 and 21 years old, blamed their creativity with documentaries. In 1971 'Extremes' appeared, a compilation of scenes from the life of the then youth. Violence, sex, alcol and hard drugs were reportedly raw. No poses, no theater, no, realistic movie footage that shocked the then public. The loose non-existent recordings occurred in London and on the Isle of Wight during the infamous festival. The sixties were indeed golden times, with beautiful and ugly excesses. The somewhat elderly among us (sixties) will look back to the past. And until it comes to the conclusion that unfortunately we have since experienced an inverse evolution with intolerance and puritaness. It may be, said Bredero.

Long unfounded, now on DVD released by Gonzo Multimedia along with a CD from the soundtrack. There are gems of Arc, Crucible, Mark McCann and Supertramp. Arc was a progrock band with Hammond organist Mick Gallagher who later joined Ian Dury & the Blockheads, and played at The Clash. From Mark McCann you hear two beautiful folk songs with acoustic guitar. Now disappeared from the ground. Supertramp released their debut album in 1970 and was still at the beginning of an unruly fame. 'Words Unspoken' MUST listen to you. Allow you to catapult back to the early years of the (prog) rock, strongly melodic and enthralling to tears.
Marino Serdons (4)
Historical DVD (+ cd) of the 'golden' sixties, raw but honest. Enjoy this forgotten documentary and his magnificent music